Home / Economic/Market Insights / How To Invest Better / Planning For Retirement / Bank of America is Betting Against This Rally: Here’s Why They Might Be Right and What You Should Do About It The red hot market rally off March 23rds lows continues with no signs of slowing down.

The S&P 500 is now up 32% in six weeks and individual companies, such as those that the Dividend Kings Phoenix Portfolio was buying aggressively in late March, are up far more.

After the fastest bear market in history, and the most volatile month for stocks ever (March) it sure feels good to see our portfolios leaping higher, sometimes by 12% in a single week.

But one of the best investment teams in America just sounded the warning about this rally ending relatively soon. In fact, Bank of American is now officially tactically bearish on stocks in the short-term.

Let’s look at why, and what you should and shouldn’t do to protect your portfolio in the coming weeks.

The 4 Reasons Why Bank of American is Bearish On Stocks

On May 15 Bank of America’s Research Committee has officially become “tactically bearish” on stocks citing four reasons they think a 10% correction might be coming soon. 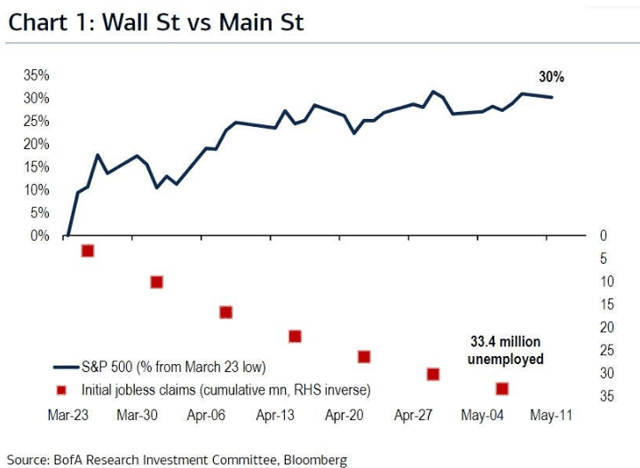 It’s hard to argue with BAC Investment committees facts or reasoning, especially that stocks appear to be ignoring some of the worst economic data in history.

Photo: “Brooklyn Street Scenes – Bank of America on Fulton Mall on a Rainy Winter Night” by Steven Pisano is licensed under CC BY