Wealth inequality is at historic levels and has many people extremely upset. Some populist politicians even consider the existence of billionaire to be a “policy failure” and would like to impose wealth taxes specifically designed to quickly eliminate their fortunes. 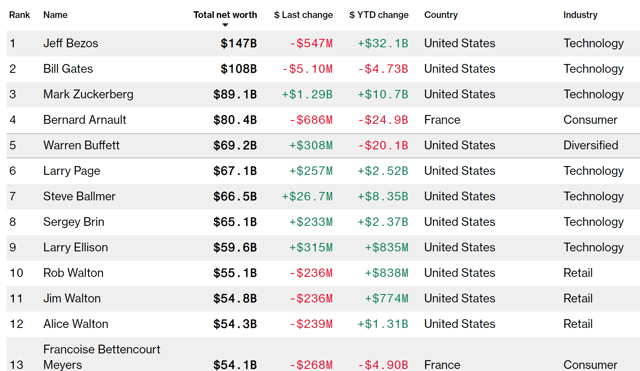 Looking at the list of the world’s richest people it’s understandable why people might look with shock and some even horror at some of the fortunes amassed by people like Amazon (AMZN) founder Jeff Bezos. In fact, had it not been for his recent divorce, today Bezos would be worth about $195 billion.

The fortunes of the 500 richest people on the planet are so enormous that on a single day in March they collectively lost $239 billion, at least on paper.

For context, $239 billion is $4 billion more than Egypt’s GDP, and Egypt is the 44th richest nation on earth.

While it’s popular to demonize such vast wealth, it’s actually not necessarily a good policy decision to try to eliminate such inequality from the earth.

In fact, I’ll show you how you can personally profit from the rise, not just of these billionaires, but the first 11 trillionaires in history.

The Rise Of The Trillionaire Isn’t Actually A Bad Thing

Nobel laureate William Nordhaus in a 2004 paper called Schumpeterian Profits in the American Economy: Theory and Measurement concluded that

We first show the underlying equations for Schumpeterian profits. We then estimate the value of these profits for the non-farm business economy.

Jeff Bezos and his now ex-wife didn’t amass a fortune of $195 billion by stealing from society, but by creating a company that delivered such incredible innovation and value to the world that it enriched global GDP by approximately $9.8 trillion.

That’s because, according to the Nordhaus study, 98% of the benefits of  Schumpeterian profits accrue to society, and the inventors/entrepreneurs that brought us those companies keep just 2%.

How much is $9.8 trillion? For context, Statista estimates that at the start of 2020 the global economy was $90.5 trillion and so Jeff Bezos is potentially responsible for 10.8% of all the wealth in the world.

The same charitable giving or wealth redistribution via taxation and social safety nets that keeps billions fed and out of poverty (and supplies us all with stimulus checks during this pandemic) wouldn’t exist if not for the likes of Bezos, Gates, Zuckerberg, etc.

But what about the popular idea that Amazon is an evil corporation that grinds it workers under its jackbooted heels? 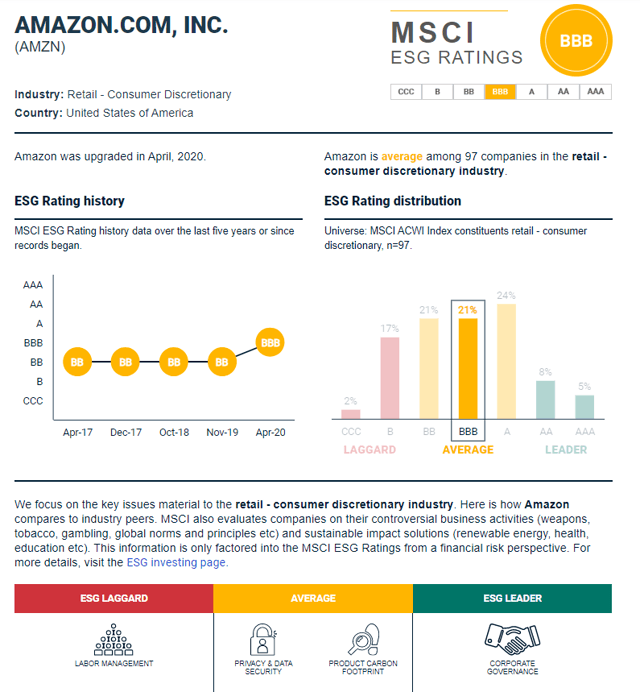 Actually, according to indexing giant MSCI, Amazon’s ESG score is BBB, which is about average for consumer discretionary companies.

In fact, while Amazon does indeed have many ways it could improve its labor relations, it’s ESG rating improved in 2020 from below average.

Or to put another way, besides being one of the greatest job creators in history, Amazon has steadily been improving its environmental, social, and governance ratings.

What about those other evil tech companies that so many ESG (and pension and retirement) funds used to generate impressive performance over the decades but today are hated by so many? 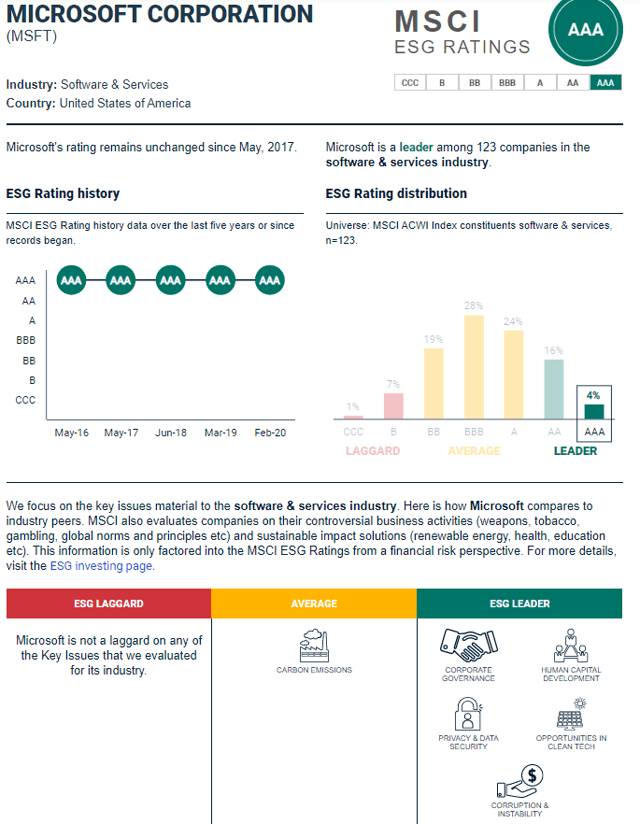 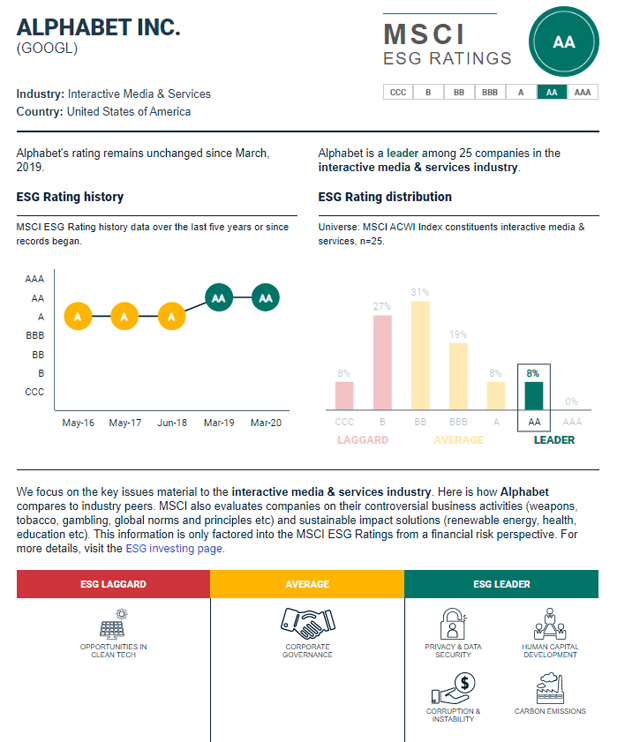 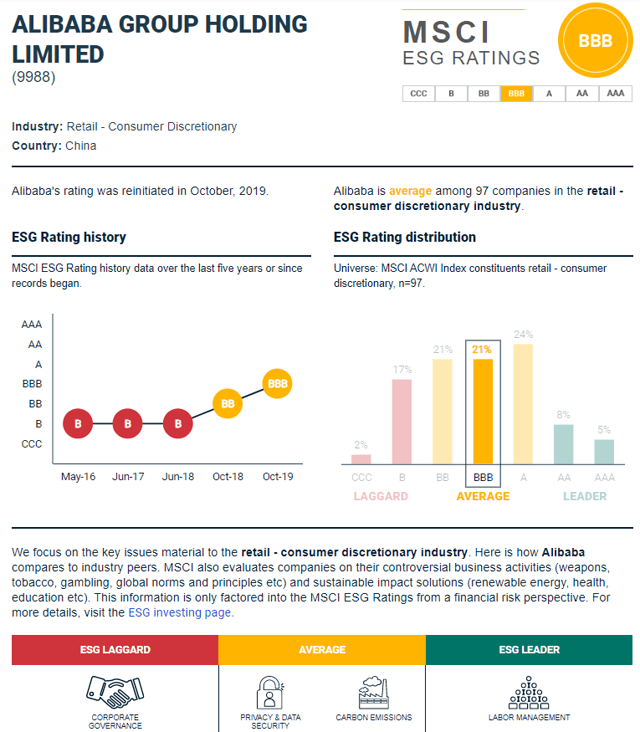 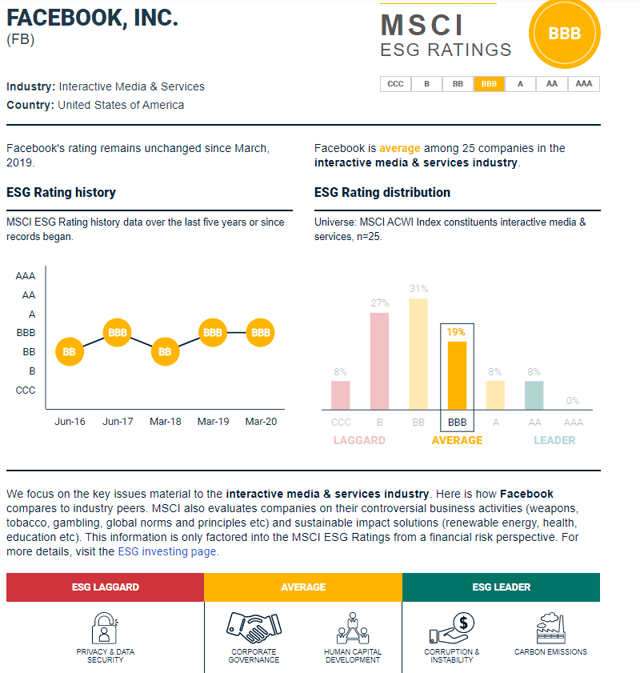 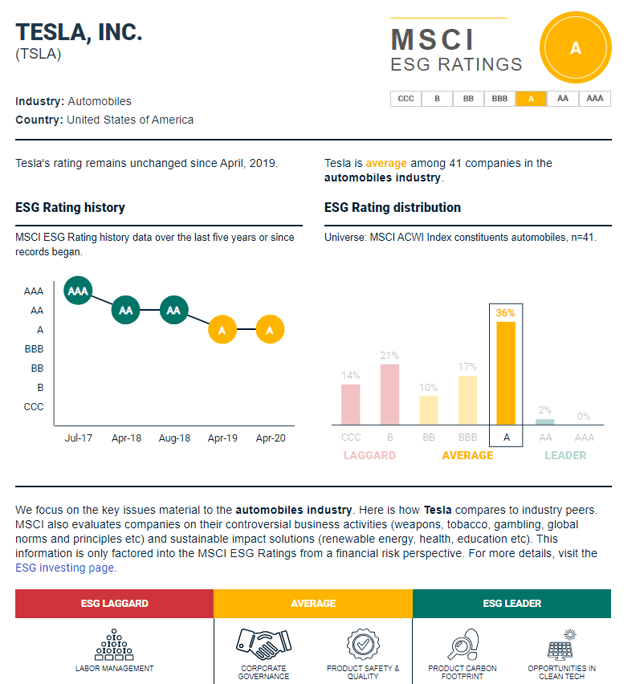 No company is perfect, and all have areas that MSCI, BlackRock, and the rating agencies (all of whom now look at ESG metrics) want to see improved.

But note that even might Tesla, a beloved name among the environmental crowd has seen its ESG ratings sliding considerably in recent years due to, of all things, poor labor relations.

Does that mean that Elon Musk is “evil” and doesn’t deserve his $40 billion fortune? No, it just means that the quintessential “environmental growth stock” has a lot of work to do in its pursuit of “people, planet, profit.” 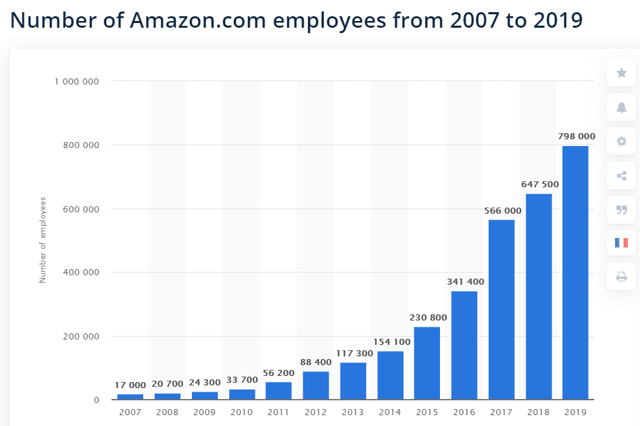 Amazon recently upset Wall Street by announcing it would be not only hiring another 100,000 workers to help with fulfillment capacity (its online sales business has been booming thanks to lockdowns) but it would be spending 100% of profits on improving its COVID-19 response. That includes more effective protections for employees.

We also can’t forget the side benefits of the online sales platform Amazon created. In 2017 there were 20,000 small businesses (who create 50% to 60% of all jobs in the US) on Amazon’s marketplace platform. These created another 900,000 jobs in addition to the 800,000 that Amazon employed directly. Today those figures are likely higher.

The “Amazon effect” has even been credited with reducing inflation over time, which has allowed for low-interest rates, which in turn, allows businesses to borrow at record low rates, fueling even more job creation.

What about all the mom and pop retail jobs that Amazon has killed, or even the big department stores that it’s helped drive out of business?

That’s called creative destruction and it’s how society’s progress and grow. Consumers, not Jeff Bezos, killed department stores, by deciding that Amazon (or Walmart or Target)’s online offerings were better suited to their needs.

The same “woke” Millenials that decry the death of main street are the ones who subscribe to Amazon Prime and helped kill J.C Penny’s and drove Neiman Marcus into bankruptcy.

And let’s not forget that innovation, through driving productivity is how the economy grows. Literally labor force growth + productivity growth are the only two factors that determine long-term economic growth.

In 1850 80% of Americans were farmers. Today just 2% are. Yet America’s farmers, through the embrace of the tractor, fertilizers, etc, produce enough food to not just overfeed America, but even export over $120 billion worth of food to other countries.

Do we lament the “jobs apocalypse” that the tractor represented? Or do we celebrate the fact that today tens of millions enjoy far less labor-intensive, mundane, and fulfilling careers? Ones that happen to pay far better than the jobs of the past. 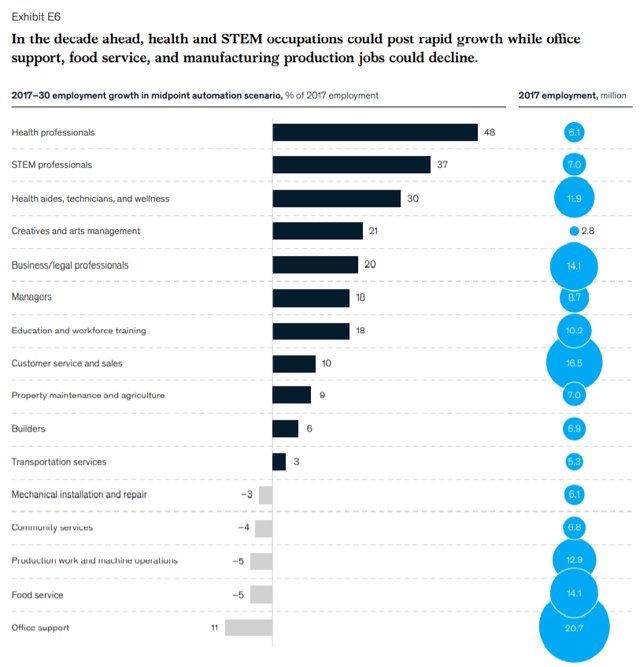 Here’s analyst firm McKinsey’s estimates of which jobs will decline and which will grow from 2017 to 2030.

Yes, science, technology, engineering, and math, as well as healthcare, the highest skilled professions are expected to boom.

But so are health aides, construction, creative/artistic professions, and customer service, all professions that those without college degrees can pursue.

We can debate how to create the kind of equality of opportunity that most people agree is essential to a thriving entrepreneurial society such as America’s.

But the way to achieve opportunity for all isn’t by banning billionaires or breaking up Amazon, Microsoft, Apple, Facebook, or Alphabet.

Companies that only rose to prominence because they offered us products and services better than their competitors, at attractive prices (sometimes free), and with more convenience.

How To Profit From The Rise Of 11 Trillionaires