How to Protect Your Retirement Portfolio From Election Uncertainty

In part one of this series, I explained who was likely to win the Presidential election in November, and why that actually matters far less than who wins the Senate, which is shaping up to be the true nailbiter on election night.

With the S&P 500 now extremely overvalued, and thus priced for nothing surprising happening, it’s more important than ever for retirees to protect their hard-earned savings from the incredible political uncertainty facing us today.

In this article let’s start by examining every potential scenario of how the election might play out and what that might mean for not just the stock market, but more importantly the economy and bond market as well.

Finally, I’ll show you how to best protect your retirement portfolio, no matter what happens with the actual election.

Rather than speculate about how the election might affect the fundamentals of the economy and thus the stock and bond markets, I’ll leave it to the blue-chip economists at UBS to do that.

MarketWatch tracks 45 teams of economists, and UBS is considered one of the 16 most accurate, thus consistently earning a spot in its “blue-chip economist consensus.”

In fact, UBS has won MarketWatch’s economist of the month contest no less than 11 times over the past decade, by most accurately forecasting 11 economics reports for each month.

How UBS Won The Most Accurate Economist Of July Contest 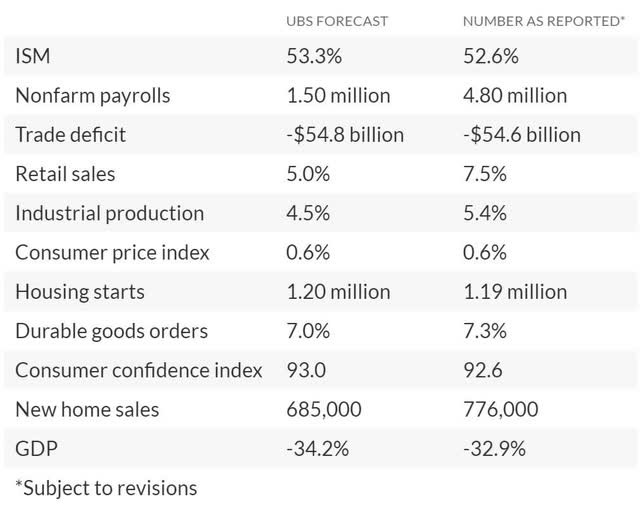 Basically, the economists at UBS are among the best in the world at understanding the incredibly complex interplay of how various factors affect the economy.

Here’s how UBS estimates the November elections could affect the fundamentals that will ultimately drive the stock and bond markets.

It might surprise some investors that a blue-wave that sees the Democrats gain control of both the executive and legislative branches might be considered a slight positive for the economy.

However, the reason for this has to do with the pandemic and the ravages its having on the economy.

You can see that from the HEROS bill that passed the House, which was $3.4 trillion in size, compared to the Senate’s GOP version, the $1 trillion HEALS act.

In contrast, a split government, which is normally what Wall Street loves to see (because it means major reforms are less likely due to gridlock) is seen as neutral or even a slight negative.

That’s because in the worst economy in 75 years, large stimulus is considered necessary by almost economists to minimize the risks of a double-dip recession.

In fact, Moody’s Chief Economist has outright said that without at least a $1.5 trillion Phase four stimulus bill, he expects a double-dip recession that could cause unemployment to remain 10+% until the pandemic is over.

According to the Centers for Infectious Disease Research & Policy (CIDRAP), that’s not likely until mid-2022.

But that’s the economy, what about the stock and bond markets?

As far as stocks go, almost any way the election goes is neutral, to slightly positive or negative according to the blue-chip economists at UBS.

For the bond market, blue-wave scenarios might use interest rates to rise due to higher stimulus hopes and the potential for a faster economic recovery.

In a red wave, scenario interest rates might also rise a bit, though potentially a smaller amount.

What if UBS is wrong? This is where the power of risk management comes in, courtesy of another blue-chip economist team, from JPMorgan.