Sometimes the biggest reason the stock market or certain stocks experience a severe decline in price is that they first experienced a massive rise in price.

Trees don’t grow to the sky and all that.

The pandemic has changed the way we view the many previously held ways of doing things which have led to some insane gains in certain stocks that have been able to capitalize.

Many of those pandemic winners finally took a breather in recent days.

Overstock has crashed more than 44% after rising more than 2,000% since the bottom in March.

DocuSign is down nearly 20%.

Peloton is down 12% from its pandemic-induced high.

It’s possible these stocks have gotten ahead of themselves. Maybe people have overreacted about how things will look in a post-pandemic world.

But let’s assume these companies were not only in the right place at the right time, but end up becoming some of the biggest stocks from here on out.

Even if these companies live up to their now lofty expectations and their stocks end up being grand slam investments, it’s not going to be a straight line up and to the right.

These companies could become some of the most successful stocks of the next few decades and they will still crash spectacularly at some point.

This is the way it has to be for even the best of stocks because it’s impossible for expectations to stay in line with reality when you have uber-successful companies.

Let’s take a little stroll down drawdown memory lane to see how some of the most successful companies, brands, and stocks in history have done over their life as a public company.

Apple is up almost 120,000% (19.5% annualized) since the early 1980s. Yet the stock has fallen more than 75% on three different occasions and has been cut in half more times than you could count on one hand: 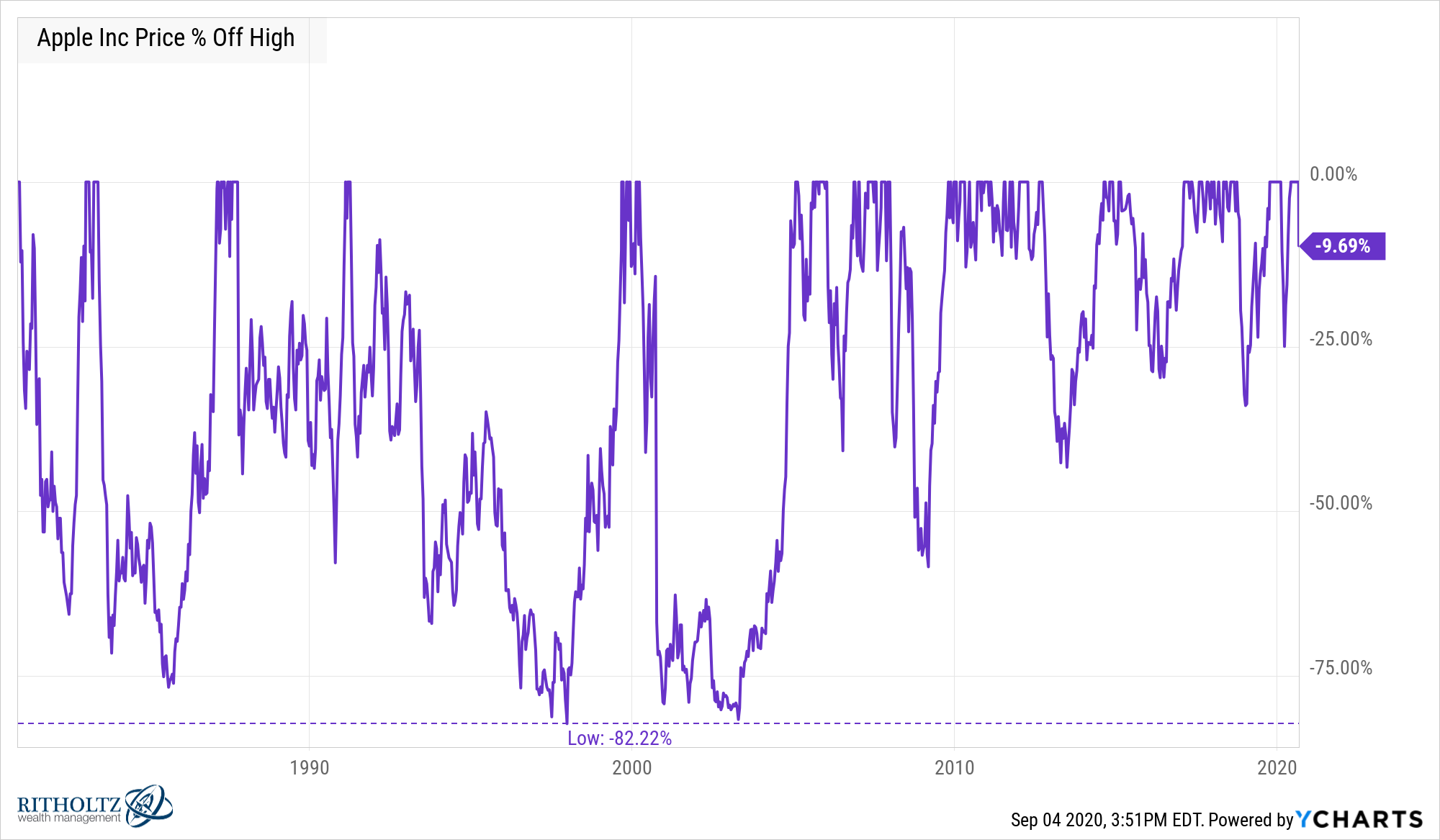 Facebook is up more than 600% (27% annualized) since its IPO in 2012. The stock has endured three separate declines of 30% or more since then including a 53% crash immediately after going public: 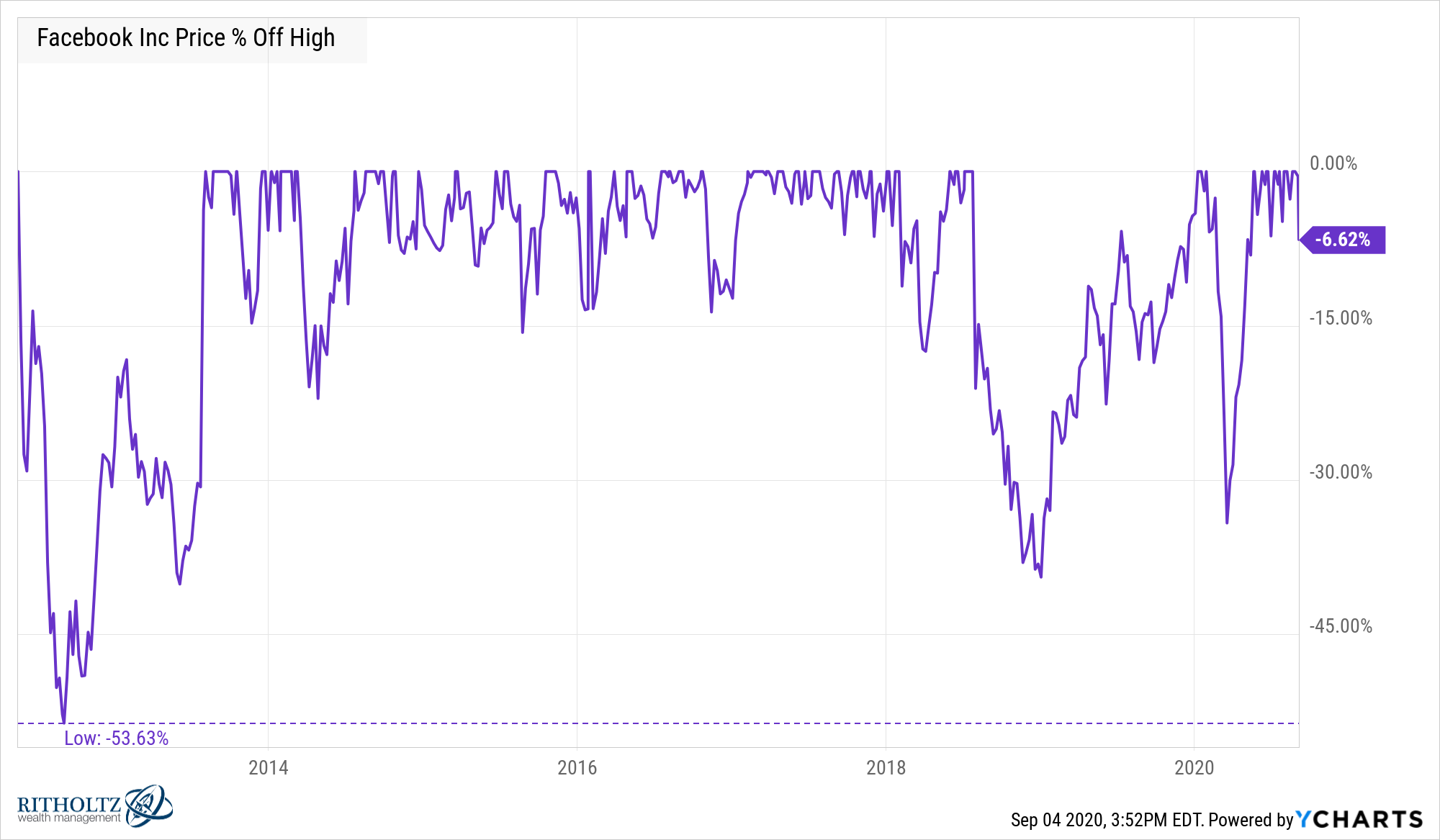 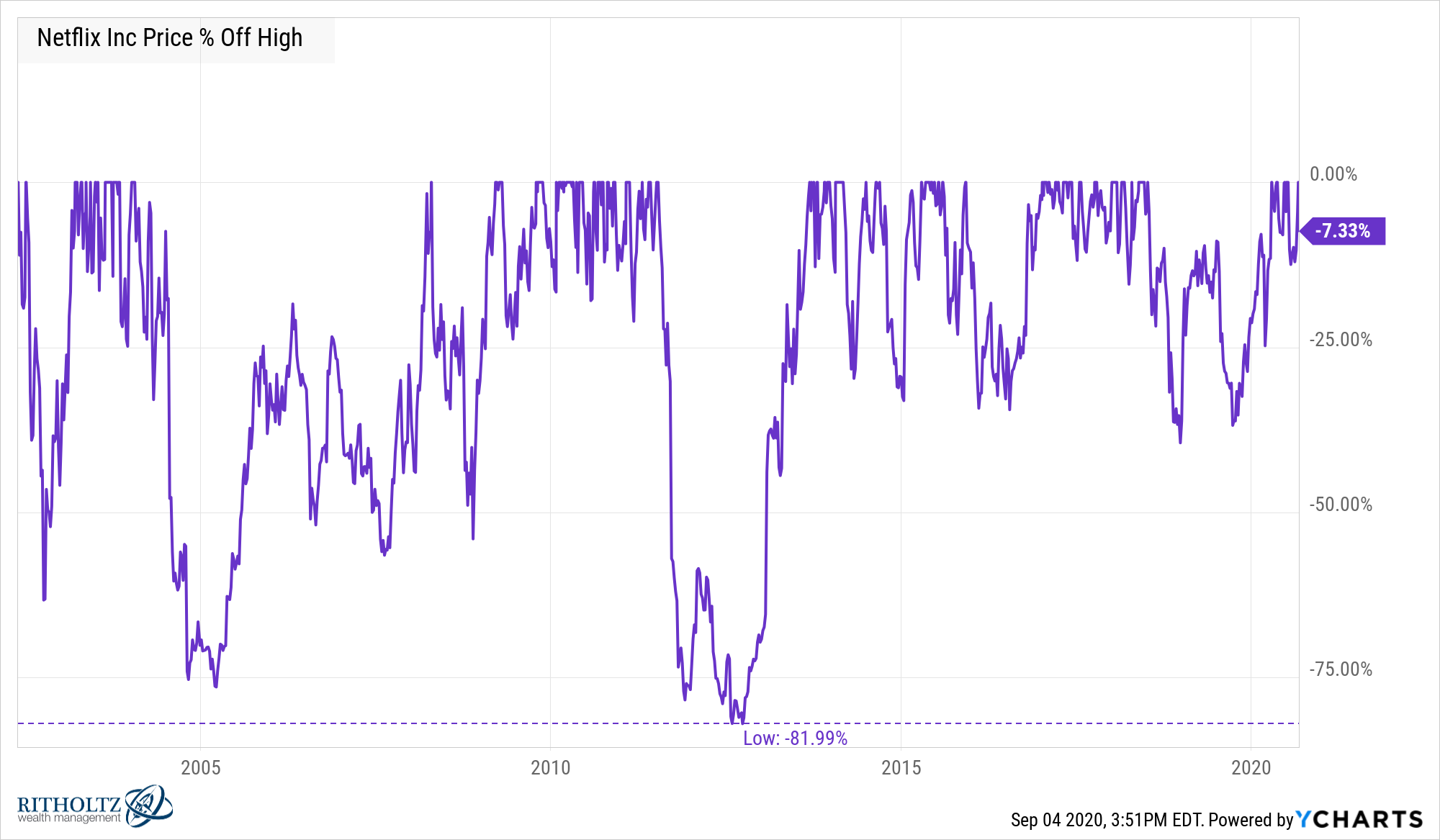 Microsoft is up nearly 350,000% (27% annualized) since the mid-1980s. It was, however, in a drawdown for nearly 15 years following the bursting of the dot-com bubble, which saw a price decline of 75% from peak-to-trough: 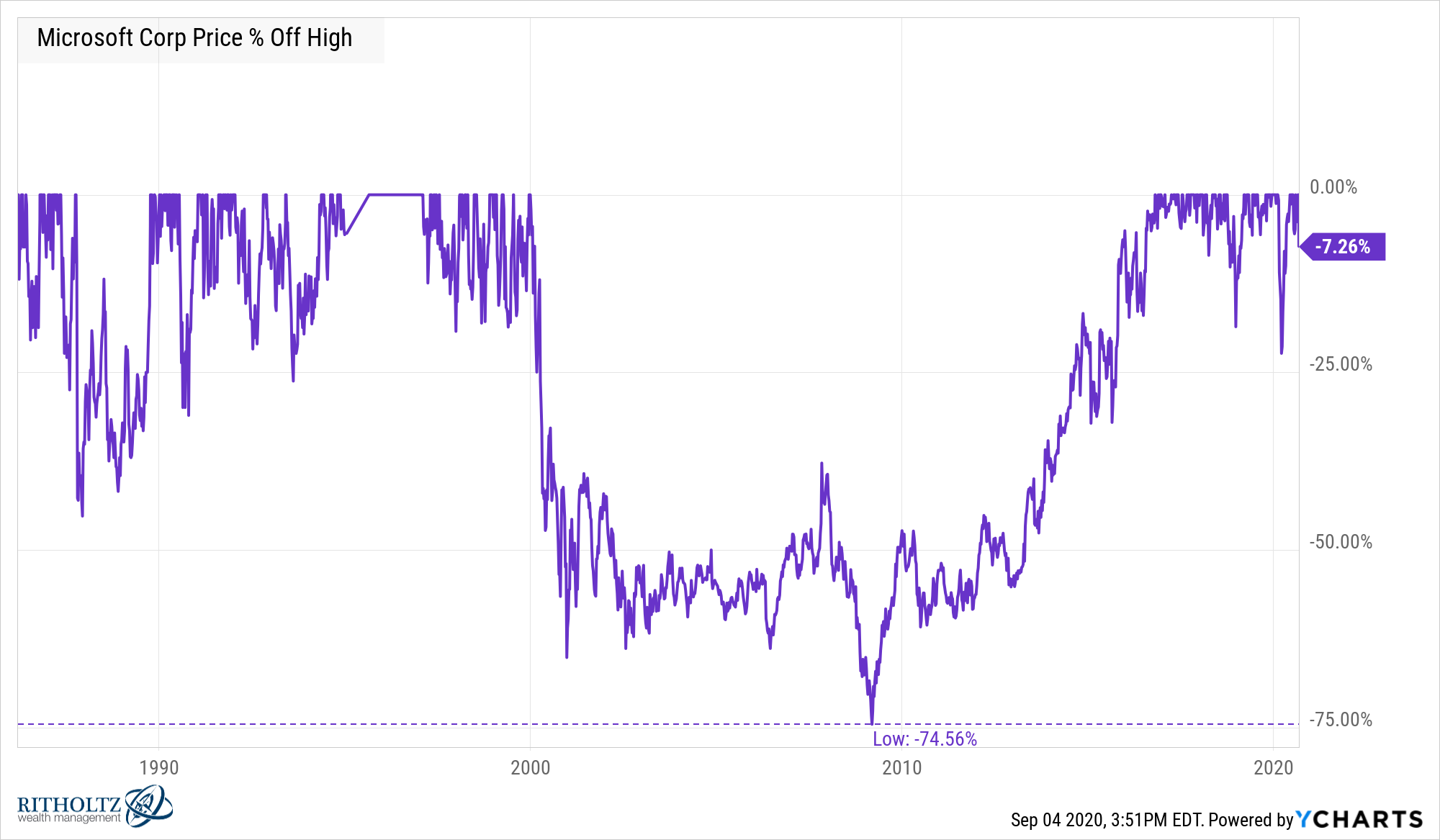 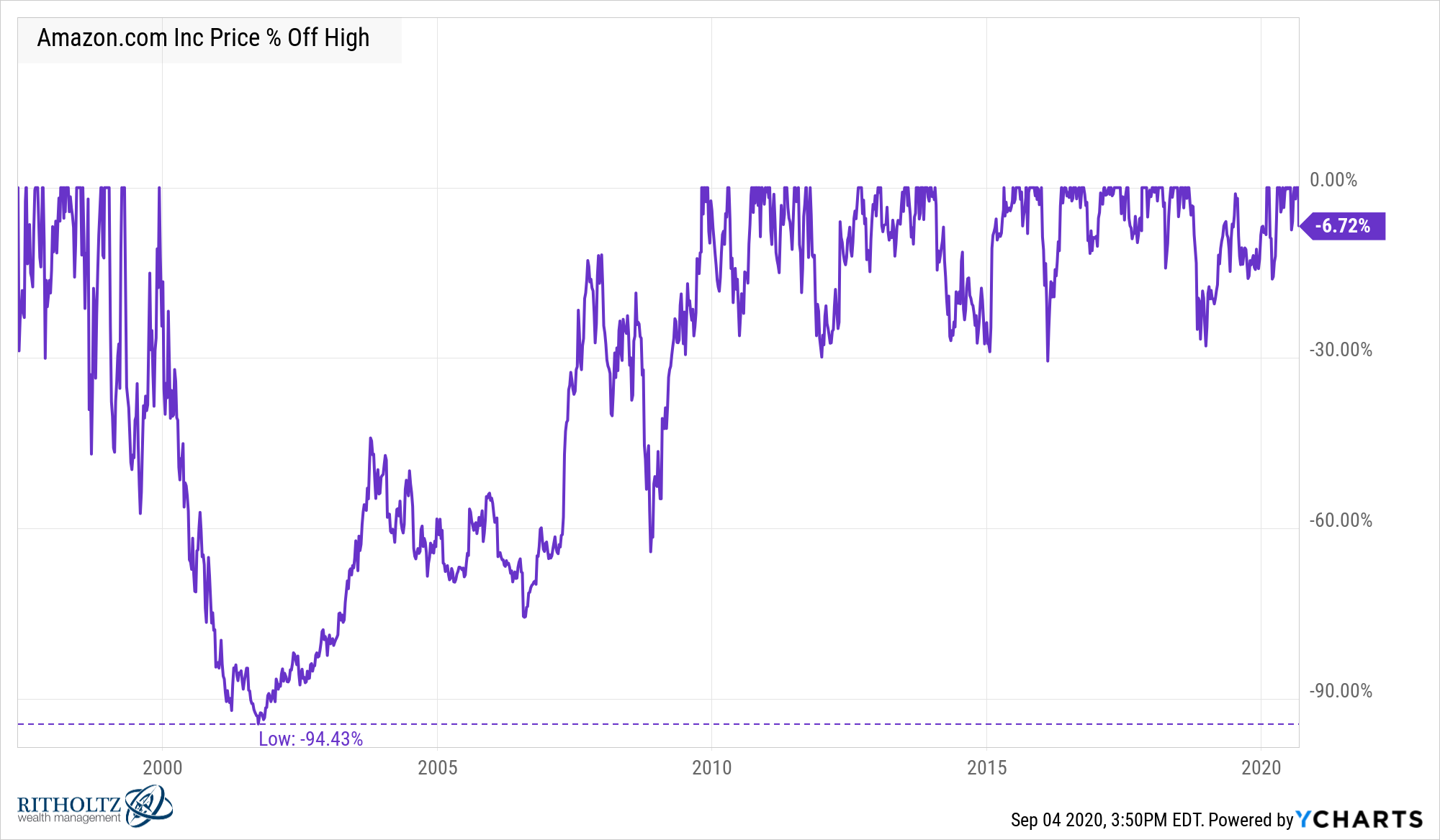