The perfectly normal, healthy, and expected market pullback is picking up steam, causing many investors to worry a correction or even a new bear market is upon us. 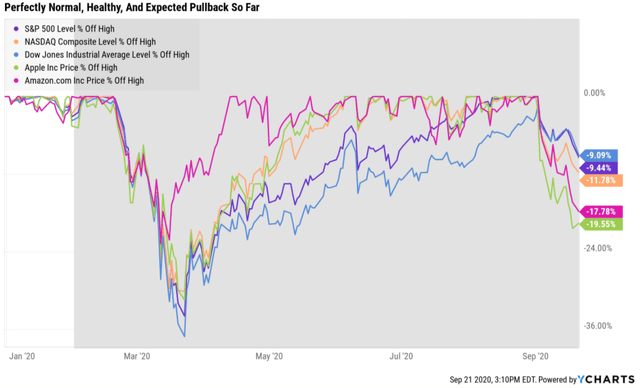 The S&P 500 is down 9.4% from its record highs set on September 2nd, while the Nasdaq is in a correction.

Beloved tech names like Apple and Amazon, are flirting with bear market territory.

There are many competing analysts out there that would tell you either this is a classic “buy the dip” moment, or the start of “the big one”, an epic market crash that could mirror the epic 50% market decline following the popping of the tech bubble.

For example, supporting the “buy the dip” argument are such cherry-picked facts as

On the other hand,

Rather than try to pretend like I know where the market’s headed next, let me simply point out the strongest proof that this current market downturn is totally meaningless, and thus something prudent long-term investors need to ignore if they want to actually accomplish their financial goals.