Here are 7 things I can’t stop thinking about in terms of their impact on the markets going forward:

1. Interest rates. There have basically been three interest rate regimes over the past 100 years or so: 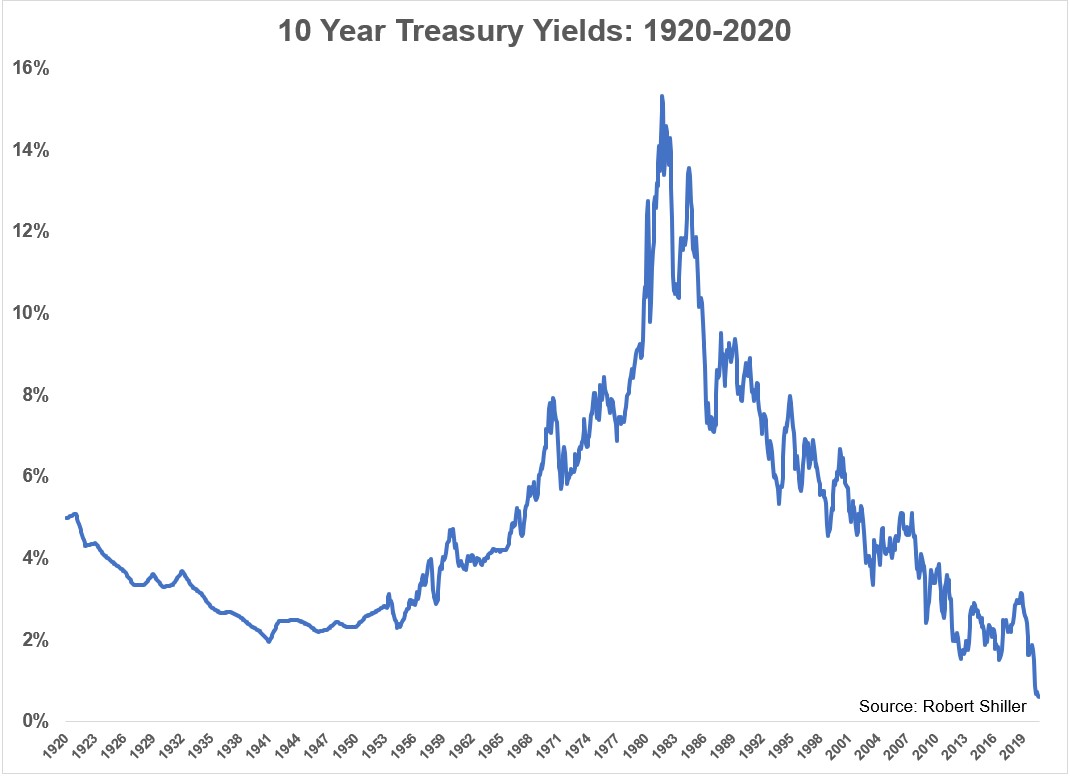 The first was a range-bound rate regime from the 1920s through the early-1950s where rates were stuck somewhere between 2-4% This was followed by a rising rate environment until the early-1980s which saw the 10-year yield go from around 2% to nearly 16%. It’s been all downhill from there as interest rates have gone from double-digit levels to the floor over the past 40 years. The problem is rates have NEVER been this low before. No one knows what the unintended consequences will be or how long it will last or what it means for things like investor sentiment and asset allocation decisions going forward. One thing I am sure about is there are no easy answers to low bond yields for investors. This is the hardest investing environment ever when it comes to wealth preservation.

2. Fiscal stimulus. The debt-to-GDP for the United States is a sight to behold:

We were able to perform an experiment in government spending during a crisis in real-time and it has been a resounding success. Retail sales quickly rebounded. The unemployment rate fell. Personal savings rates went through the roof. People were able to repair their personal balance sheets. And a depression was stopped in its tracks. I have more questions than answers:

Politicians have been promising their policies would lead to higher GDP growth for years. None of them have worked. Now they’ve finally found the lever to pull that can conjure growth out of thin air — government spending. How could any sane politician not use that lever every chance they get going forward?

3. Inflation. People like to complain about government debt levels but people have been doing that since the 1920s and there haven’t been any consequences of the massive growth in borrowing.

It’s not so much the grandkids that are at risk here because that debt is never fully getting paid back. In a healthy economy, you should expect government debt to get bigger over time. The biggest risk to all of this spending is inflation. And it’s been a long time since investors have had to deal with the impact of inflation considering we’ve been in a disinflationary environment since rates peaked in the early-1980s. Plenty of people point to the 1970s double-digit inflation as the bogeyman but the WWII scenario of a massive amount of government spending in a short period of time followed by a one-time spike in inflation is probably more likely. The biggest risk for bond investors is not necessarily rising interest rates. Rising rates would be a good thing for bond investors eventually because those higher yields would translate into higher returns in the future. The biggest risk for bond investors is higher inflation because it erodes the value of your future fixed-income payments. I’m not all that worried about inflation as it pertains to the stock market because stocks are the best inflation hedge there is but it could make things even worse for bond investors from such low starting yields.

4. The Fed. In every alien horror movie, there always comes a point when the people being hunted by said alien come to realize it’s somehow getting stronger and/or smarter.

The main character of the movie, who typically covered in sweat, mud, or blood will say, “It’s evolving.” The Fed is the alien in this example. In 2008 the entire financial system was closer to the precipice of collapse than most people realize. Looking back on it now I’m guessing Fed officials regret not going bigger or moving faster. Jerome Powell and company didn’t want to have that same regret this time around. The Fed met the pandemic with bazookas blazing. They poured trillions of dollars into the system to keep markets functioning, effectively taking the Great Depression scenario off the table. Markets rebounded across the board in record time. It’s going to be difficult for the Fed to retract its alien tentacles from the markets. And if investors come to expect the Fed to have their back during every downturn there could be some misplaced expectations and risk-taking because of it.