To say that investors are scared of the coronavirus pandemic is an understatement. In March, surging cases around the world and in the US resulted in lockdowns that crushed the global economy, and the stock market. 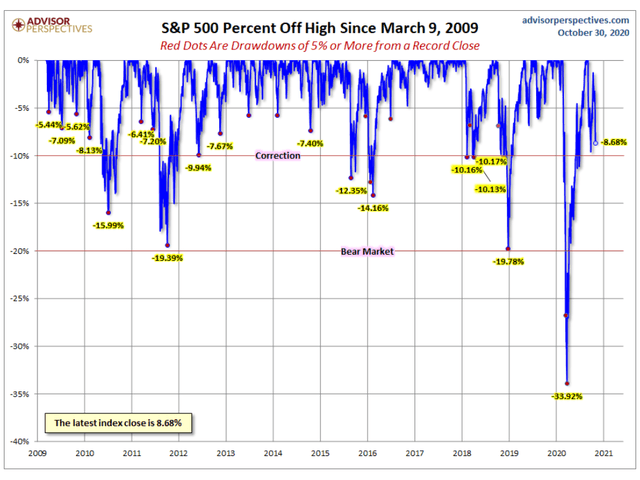 The S&P 500 plunged a remarkable 34% in just four weeks, the fastest bear market in US history. Of course, we all know what happened next. The most extreme bear market in history was followed by the most incredible post-bear market rally in history. The broader market managed to hit new record highs just five months after bottoming in March when the world economy was shut down and fears of another Great Depression were on the minds of every investor.

But now the virus is back with a vengeance, with cases surging out of control in most of Europe and in 37 US states. 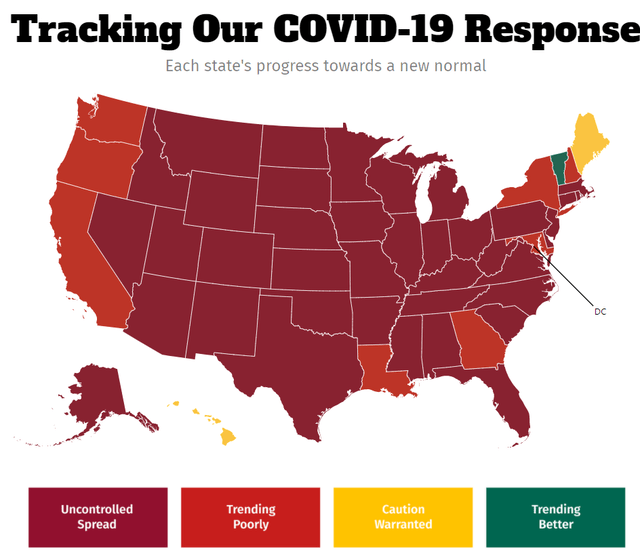 Last week the S&P 500 plunged 5.6%, the worst week since March. The Dow Jones Industrial Average did even worse, falling almost 6.5%. If you are one of the millions of investors who are having flashbacks to those dark days in March, here’s what you need to know about how bad this pandemic is likely to get in the coming months. More importantly, I’ll tell you the most effective way to protect your hard-earned savings from the potential retirement dream killing carnage that might be coming to Wall Street in the coming weeks.

Things Are Likely To Get A Lot Worse

Globally the pandemic is going horribly, with the seven-day rolling average now approaching 500,000 confirmed cases per day. MIT estimates that for every case we find there are 12 we don’t.

In the US things are even worse, with daily cases up 45% in the past two weeks. The seven-day rolling average is up to almost 83,000. That’s nearly three times the April record. Back then we thought “it can’t possibly get worse.” Well, it can, and is. Health experts like Dr. Anthony Fauchi and Dr. Michael Osterholm, who are among the most experienced epidemiologists on earth (and have over 80 years of experience between them), have warned us all year this was coming. Dr. Fauchi back in July warned that without appropriate social distancing measures we could see rolling seven-day averages hit or even surpass 100,000 per day.

Dr. Osterholm, direct of the Center for Infectious Disease Research & Policy, or CIDRAP at the University of Minnesota, said months ago on his podcast that he expected that over 100,000 cases per day were likely after Labor day. Colder temperatures forcing people indoors where the virus spreads easier, combined with pandemic fatigue and lower air humidity, would combine into a perfect storm of viral spread. Harvard estimated back in April that in a worst-case scenario, a second wave (now the third wave in the US) could reach up to 200,000 new daily cases. That’s based on the 1918 flu pandemic in which the largest wave was 6X more severe than the first. Just how bad could things get?

Prepare For A Horror Show Of A Winter 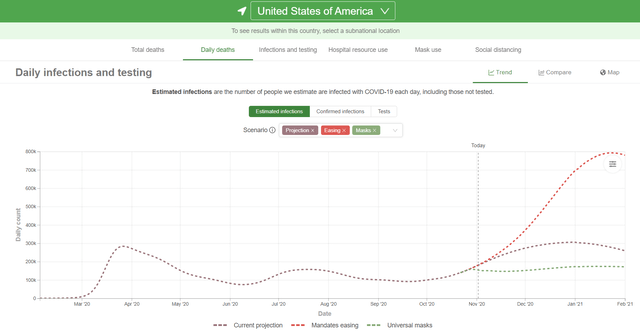 There’s good news, bad news, and terrible news from the Institute for Health Metrics & Evaluation’s most recent four-month forecast. The good news is that infections are only expected to peak about 20,000 per day more than April. The bad news is that this is almost double the estimated infection peak in mid-July (when we peaked at 76,000 daily cases). But the terrible news is that these estimates might prove incredibly conservative and here’s why. 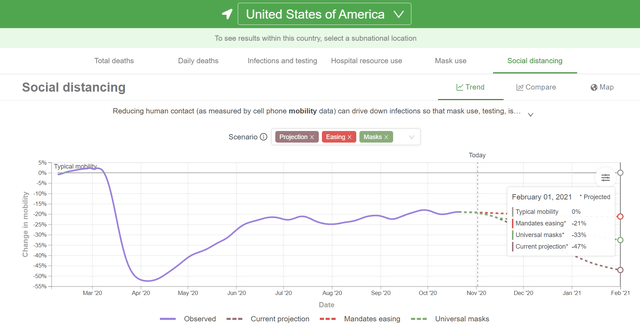 IHME’s model assumes that either through lockdowns or merely people staying home on their own, social mobility will fall significantly in the coming months. Even in their “mandates easing” scenario, in which states blindly keep lifting restrictions, social mobility is assumed to fall 21%. And under the base case forecast, social mobility, as tracked by cell phones, falls 47% by February 1st. For context, at the height of the lockdowns in late April, we hit -52% on social mobility. Now here’s some more good and bad news for you to ponder. 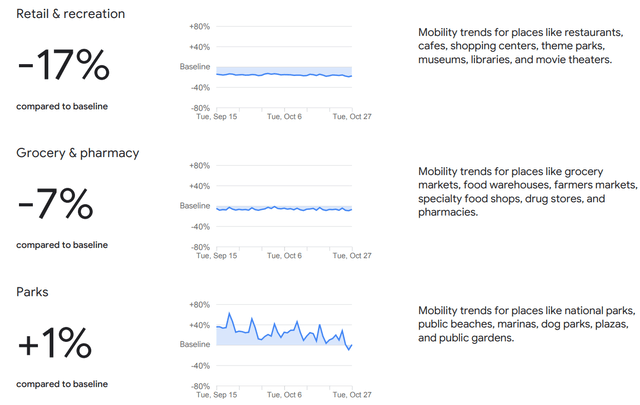 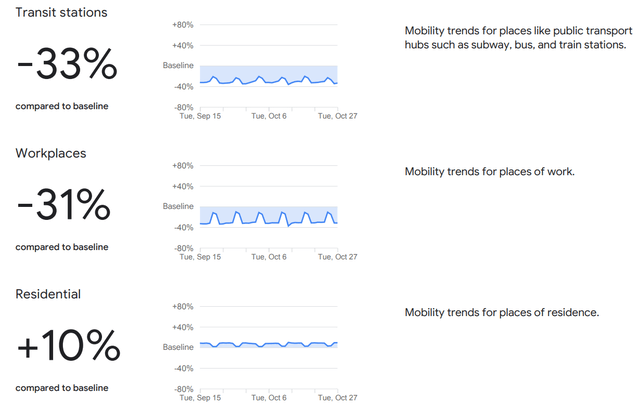 Google’s randomized cellphone data shows that retail mobility hasn’t changed in the last two months, even as cases were surging and states were warning that ICUs were filling up fast. In fact, the overall social mobility of Americans hasn’t changed much despite the worsening pandemic. Why is this both good and bad news? If you believe that we should just grin and bear this pandemic, and keep the economy open and go about our lives as if the virus were no big deal, then it’s wonderful news that Americans have, thus far, mostly ignored the surging cases. But IHME’s model assumes that we’ll lock down most states almost as tightly as we did back in April.

Why Lockdowns Are NOT Likely To Happen Again

There does not seem to be any appetite from governors, the administration, or Congress to encourage a second wave of stay-at-home orders if we can continue to take alternate measures to curb the spread, such as encouraging mask-wearing, social distancing, and other public health actions.” –  Heather Meade, healthcare policy advisor and principal Washington Council for Ernst and Young

“I don’t believe there will be a second lockdown…America does not have the willpower or the leadership to withstand another shutdown or more economic devastation.” – Dr. Daniel B. Fagbuyi, an emergency physician in Washington, D.C., and Obama administration biodefense and public health advisor

“The appetite for shutting down the entire country is simply not there, and a lack of real borders between states and regions means a hodgepodge of regulations governing travel between states and requirements for infection control.” –  Dr. Farley Cleghorn, leader of Health Practice at Palladium and a global health expert with more than 30 years experience as an epidemiologist.” –Healthline

America is a country in which it took months for a majority of people to even agree on wearing masks, something which a small but passionate minority still refuses to do. The first lockdown avoided a depression due to $2.3 trillion in stimulus passed in record time. This time we can’t even pass $500 billion in targeted stimulus due to partisan gridlock. Each state’s governor has the authority to decide whether or not a state lockdown, not the President, not Congress. But isn’t avoiding more lockdowns good news for the stock market and economy?