For months many investors feared that the results of the most dramatic and high-stakes election in decades could cause chaos on Wall Street. 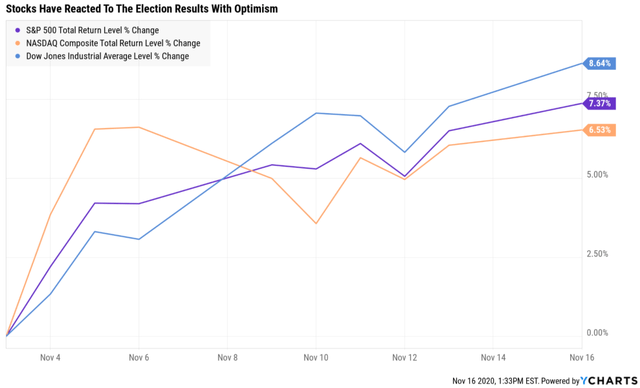 Despite the numerous doomsday prophecies about how a contested election could send stocks crashing, the S&P 500 has actually rallied over 7% since the November 3rd election. The Dow has rallied even more, up almost 9%. Of course, President Trump still refuses to concede the race and vows to fight on for as long as it takes to ultimately be declared the victor. In other words, according to our current president, and tens of millions of his most ardent supporters, the election is far from over.

That’s actually 100% correct, but not for the reasons many think. The reality is that the 2020 election is not over, and the two most important races have yet to be decided. Read on to discover why the thing that most people are hyper-focused on, the Presidential race, is not the most important race of 2020. Most importantly, find out which two races, which will be decided in the coming weeks, will truly determine who controls the government for the next two years. That means the fate of trillions of dollars of stimulus, taxes, and regulations are still up for grab, which could have important implications for stocks over the coming months.

The Presidential Race Is Over…BUT 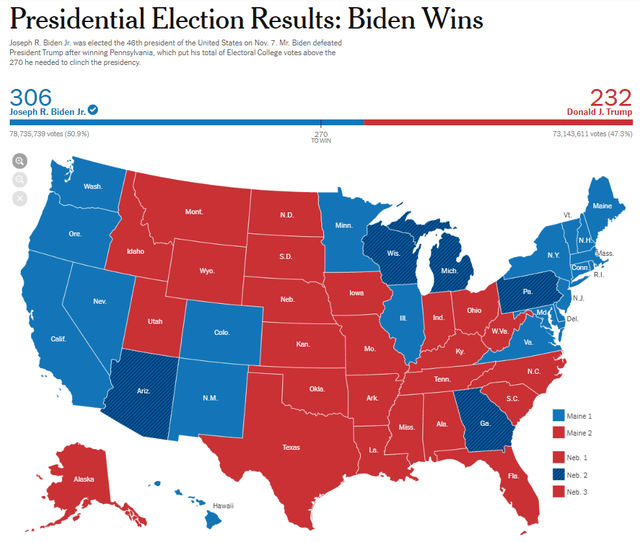 In 2020 Joe Biden beat Donald Trump 306 electoral votes to 232 due to winning a handful of key swing states by a few hundred thousand votes.

Fears of widespread fraud have been thoroughly debunked by the  Cybersecurity and Infrastructure Security Agency (CISA), which oversees US elections,

“The November 3rd election was the most secure in American history. Right now, across the country, election officials are reviewing and double checking the entire election process prior to finalizing the result.

“When states have close elections, many will recount ballots. All of the states with close results in the 2020 presidential race have paper records of each vote, allowing the ability to go back and count each ballot if necessary. This is an added benefit for security and resilience. This process allows for the identification and correction of any mistakes or errors. There is no evidence that any voting system deleted or lost votes, changed votes, or was in any way compromised.

“While we know there are many unfounded claims and opportunities for misinformation about the process of our elections, we can assure you we have the utmost confidence in the security and integrity of our elections, and you should too. When you have questions, turn to elections officials as trusted voices as they administer elections.” – CISA (emphasis original)

The numerous lawsuits filed by Trump have been thrown out by judges, including those appointed by Trump himself as well as G.W. Bush, on the basis of lack of evidence. The lack of fraud isn’t surprising since actual voter fraud is incredibly rare.

In 2014, Loyola Law School professor and voting expert Justin Levitt investigated every general, primary, special and municipal election held since the year 2000. Of more than 1 billion ballots cast, he found just 31 credible instances of potential voter impersonation, which is one of a few ways that cheating can actually occur.” – Yahoo

The actual cases of voter fraud amount to 1 in 32.3 million US ballots cast from 2000 to 2014. Claims that voter fraud is rampant in the US are simply not supported by the actual facts. This is why the FBI director, a Trump appointee, recently told a Senate hearing that there are no historical cases of widespread voter fraud conspiracies.

FBI Director Christopher Wray testified to Congress on Thursday that the agency has not historically seen “any kind of coordinated national voter fraud effort in a major election,” including through mail-in voting.” – Forbes

The two recounts currently going on, Wisconsin and Georgia, have virtually no chance of overturning the results in those states, nor giving Trump the win. That’s according to not just political scholars, but Karl Rove, chief Republican strategies for G.W. Bush.

“Recounts typically don’t swing enough votes to change the winner. Out of 4,687 statewide general elections between 2000 and 2015, just 27 were followed by recounts, according to data compiled by FairVote, a nonpartisan group that researches elections and promotes electoral reform. Just three of those 27 recounts resulted in a change in the outcome, all leading to wins for Democrats…

The mean swing between the top two candidates in the 27 recounts was 282 votes, with a median of 219. The biggest swing came in Florida’s 2000 presidential election recount, when Al Gore cut 1,247 votes off George W. Bush’s lead, ultimately not enough to flip the state to his column.” – FiveThirtyEight

The margins Trump lost by are 8+X larger than the largest vote swing in US recount history. But what’s happening in Georgia right now does matter, and it matters a lot. 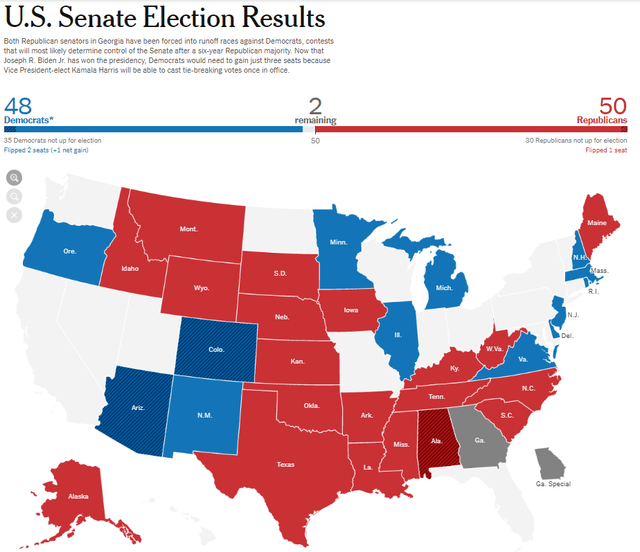 Democrats were hoping to take control of the Senate by flipping at least four seats, and thus far they’ve flipped two. The GOP is likely to retain the Senate UNLESS they can win the two Georgia Senate races.

These are just two examples of the kind of wild promises that candidates make to win votes. But without control of Congress, very few major reforms actually happen.  In Georgia, Biden appears to have won by a very narrow margin, becoming the first Democrat to carry the Peach state since Bill Clinton in 1992. The polls in GA, which showed a virtually tied race, were right on the money. Due to no candidate getting the required 50% + vote to win outright, both GA senate seats will be decided during the January 5th runoff.