The market has been on fire since October 28th, the bottom of this current market pullback. 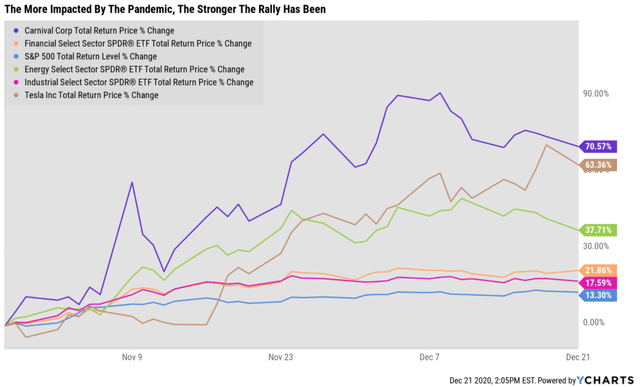 First, the election results turned out less scary than many had feared. Then news of a 90% effective vaccine (actually 94% to 100%) sent the S&P 500 up over 3% that day, and some stocks, like pandemic ravaged Carnival (CCL), up 30% on November 9th alone.

In fact, since October 28th’s lows, CCL has been a hotter stock than Tesla (TSLA). But of course, the trouble is that such a strong rally, including the best November in 33 years, caused the already overvalued market to fly off into a bubble.

The market was priced as if nothing would ever go wrong again. And of course, then something went wrong, which sent stocks skidding 2.4% in pre-market trading.

A New Super Strain of Corona Virus Is 70% More Infectious

It’s thought that the new strain could be up to 70% more transmissible than the original strain of the disease, Johnson said on Saturday, adding that it appears to be driving the rapid spread of infections.” – CNBC

On December 10th the first news of a potentially new strain of the virus started to surface. Just like in February, the market ignored the new threat, focusing on other more optimistic news/rumors.

Over the weekend the truth about the new virus became clear, in the starkest of ways.

Prime Minister Boris Johnston, who had previously said he would lift restrictions in time for Christmas, instead imposed an April style lockdown on 16 million people in the South East of England (including London).

The fact that the virus has been found on four continents already indicates that it’s likely in dozens of countries, we just haven’t found it because we haven’t been testing for it specifically.

What exactly does this new super strain, which is 70% more infectious, mean for our pandemic weary world?