2020 will go down in history as one of the most volatile years in history, courtesy of the coronavirus that resulted in the worst pandemic in over a century. 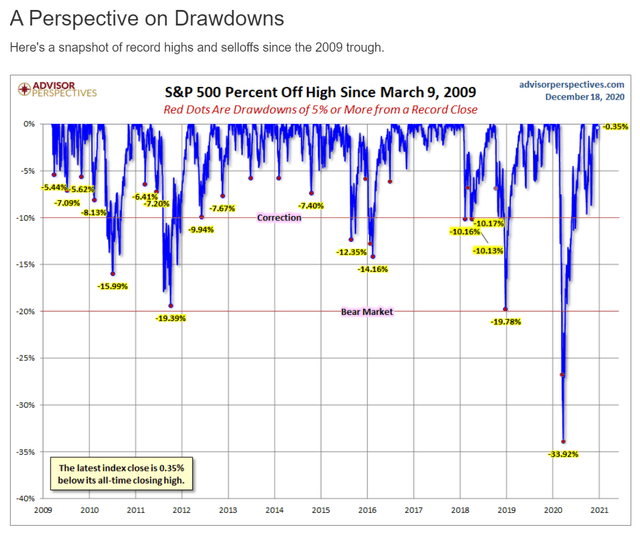 The S&P 500 plunged 34% in a single month and then saw two months of double-digit gains, as well as the strongest best market rally in history. Much of this market action was a direct result of how the pandemic was going, and the economic response to it. Last week I explained the risks of the new UK super strain of the virus, which is between 40% and 70% more transmissible.

In this two-part series, I wanted to explain what the world’s leading health experts expect from the pandemic in 2021, and what that likely means for the economy, corporate fundamentals, and your portfolio.

Because if you know what’s most likely to happen, about the most important fundamental in the world right now, then you have the best chances of avoiding costly mistakes and profiting from the best blue-chip bargains on Wall Street. The names that are most likely to rise like a Phoenix from the ashes of this recession and soar to new heights.

Vaccine Update: The Most Important Component To A 2021 Recovery

Nothing other than vaccines and achieving herd immunity (70% to 85% national immunity) will end this pandemic. 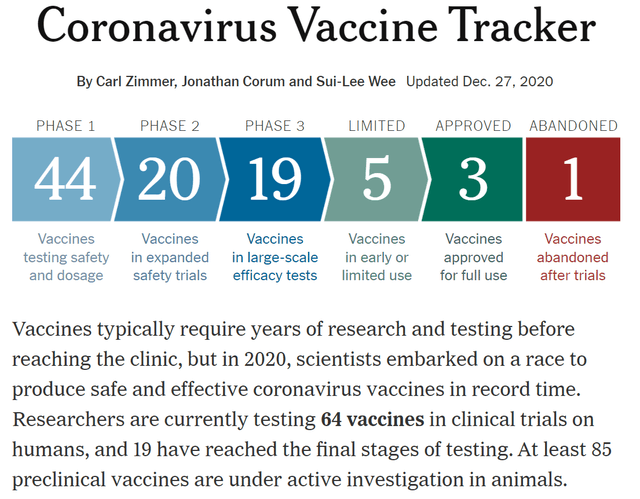 AstraZeneca’s vaccine is expected to be approved in the UK in the next week.

JNJ’s one-shot vaccine, the first single-dose vaccine, is expected to be approved in February. 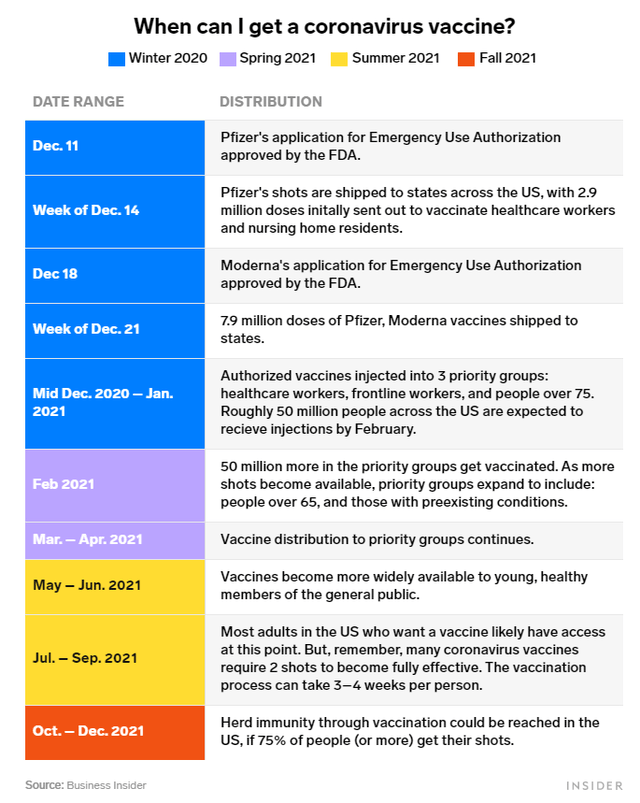 This is the estimated timeline for vaccine distribution in the US. It’s primarily based on the estimates from pharma companies about how quickly they can ramp up vaccine production.

However, we can’t forget there are many steps beyond just producing a vaccine that could hamper the speed of the rollout. 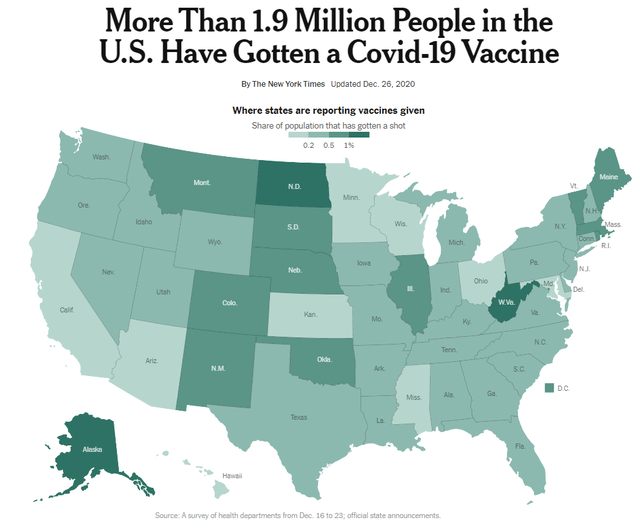 Many states are reporting receiving vaccine allocations 40% below those initially expected. 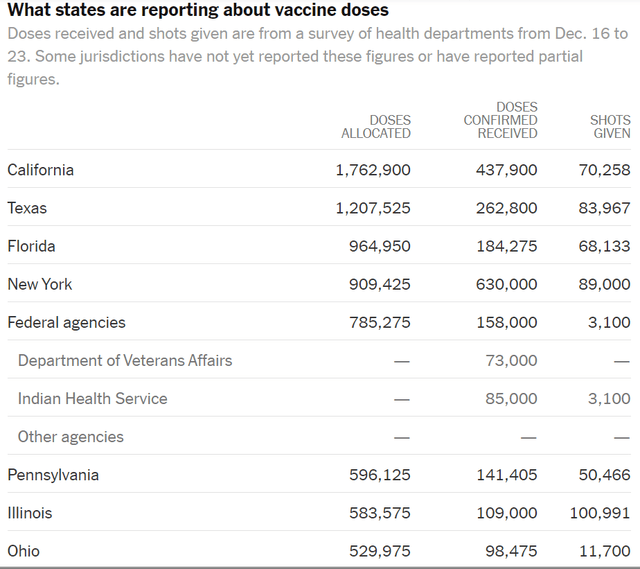 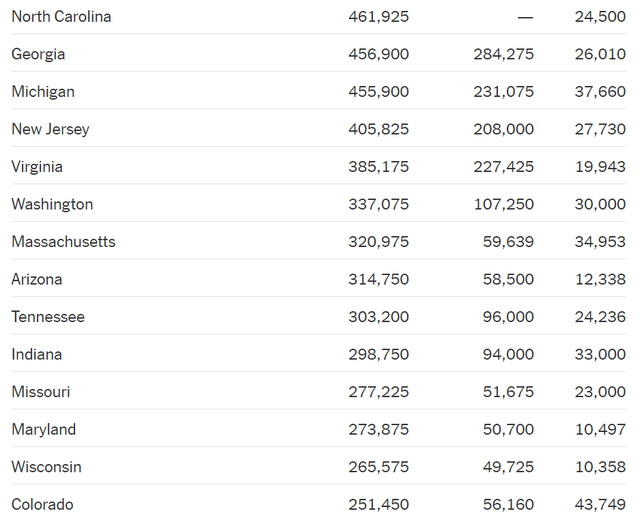 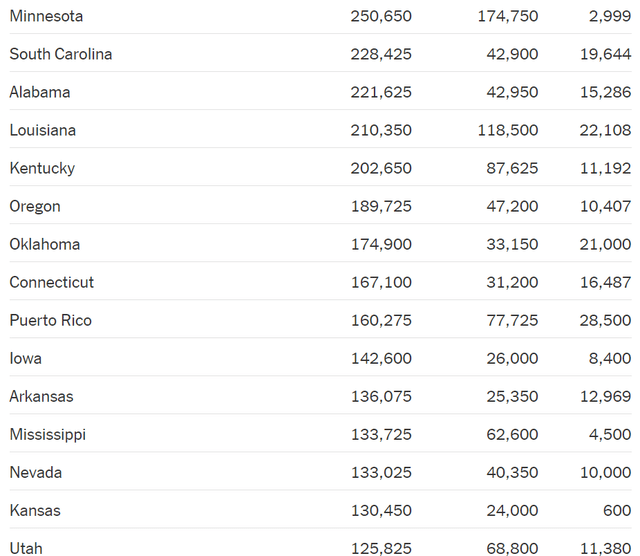 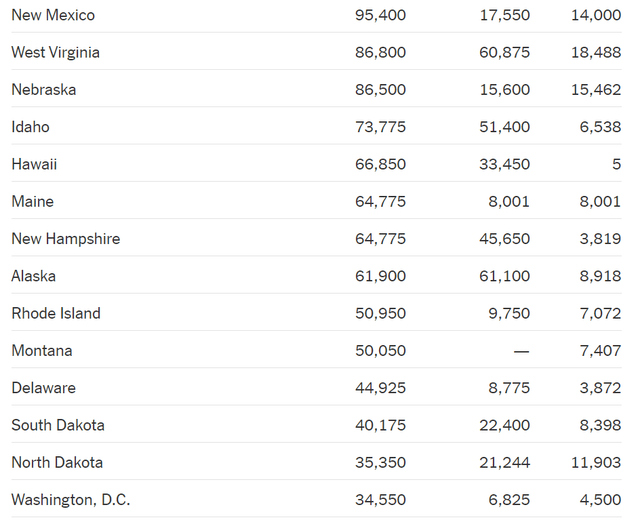 And even when they have vaccines available, most states are taking much longer to ramp up actual vaccination programs.

In other words, it’s possible that the pandemic will peak soon, or get worse for another few weeks.

For example, here’s what healthcare experts predict for the first quarter of the year.

Scientists will be watching closely for signs that the first vaccine distributions, which have been reserved for some of the most essential workers and vulnerable adults, help to blunt the spread of the virus more broadly in communities around the country.

Researchers still don’t know whether coronavirus vaccines prevent people from getting infected, only that they are good at preventing severe disease, so it may be a while before transmission slows down.

Vaccines continue for priority groups including frontline workers and Americans over age 65. As many as 100 million Americans could be vaccinated by the end of February.

Moderna’s and Pfizer’s vaccines require two shots given three or four weeks apart, so the only people with full-scale protection at this point will be those who got their second vaccine dose in January.

Doctors don’t expect the first months of 2021 to look much different from the end of 2020.

“People think, ‘Oh, the vaccine is here, then everything is over.’ No. A vaccine is not vaccination,” said Dr. Ricardo Correa, an endocrinologist at the University of Arizona College of Medicine.” – Business Insider

Vaccines are expected to have reached roughly 100 million Americans, and priority groups are likely expanding to include people under 65 with preexisting conditions.

Each state may decide a little differently who’s first in line for their shots, but generally the priority groups include healthcare workers, people over 65, frontline workers, and people with preexisting conditions.

Michael Osterholm, President-elect Joe Biden’s COVID-19 advisor and director of the Center for Infectious Disease Research and Policy at the University of Minnesota, said he would be waiting at home for his vaccine, likely until in the spring.

Osterholm is 67 years old, so he’s in one of the priority groups for vaccination.

“I’m going to get mine at my healthcare provider, and when my number comes up, I’ll be there 10 minutes early,” he said.” – Business Insider

US Pandemic Update: Most Likely Close To Peak Suck, But Things Could Still Get A Lot Worse If We Get Complacent