Home / Economic/Market Insights / How To Invest Better / Planning For Retirement / Reasons For Optimism / What Investors Need to Know About the 4th Wave of the Pandemic: Part 2 In part 1 of this series, we explored why another big wave of the virus was likely, possibly even hammering the US one final time before the American epidemic finally ends.

Of course, just because the US suffering will likely be over by July, doesn’t mean that the virus won’t keep delivering drama for another year or two.

In part one we saw why it’s likely to be until 2023 before the pandemic is over globally. But in this conclusion, I wanted to cover the two most important facts of all about the potential 4th wave of the corona virus.

That includes the effects on the stock market and your portfolio.

Fact 3: The Human Toll Won’t Be As Bad In A 4th Wave Of The Virus

IHME’s latest estimate is that by July 1st almost 4 million people will have died from COVID-19.

However, the good news is that as horrible as the deaths have been so far, and we’ll get more in the coming year or two, even a sharp spike in cases isn’t likely to cause a tsunami of deaths as it once threatened to.

Let’s consider the IHME’s model for the US. 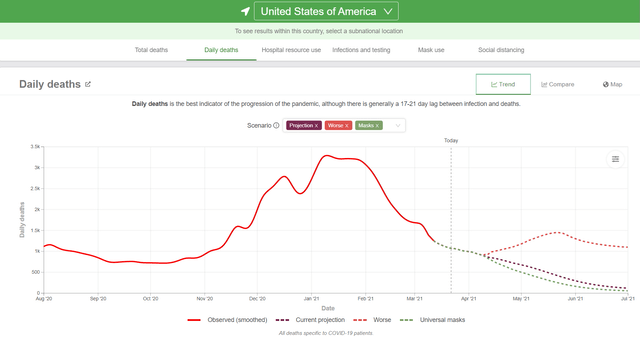 Thanks to 66% of seniors now being vaccinated, even if daily cases were to spike to over 200K per day, more than tripling from here, the rise in deaths wouldn’t be anywhere close to the 5K we saw in late January.

Every day we vaccine another 2.5 million people and thus reduce the risks of a major spike in mortality from a 4th wave.

Globally it’s going to be tougher. The reality of vaccine development and distribution is that more people are going to die than was necessary.

In the bigger context, as bad as this pandemic has been, and could still become, it’s remarkable how few people are actually likely to die.

So does this mean that stocks are poised for the best year ever thanks to robust economic boom times?