It’s never been easier to pay attention to everything that’s going on with the markets, economy, individual companies or your own portfolio.

People used to get their paper statements in the mail on a monthly basis to know what was going on with their investments. Now we can watch the changes in market values instantaneously.

So it’s more important than ever to filter out the stuff you shouldn’t care about as an investor. Here are 10 things that fit the bill:

1. How rich other people are getting. John Pierpont Morgan is attributed with the quote, “Nothing so undermines your financial judgement as the sight of your neighbor getting rich.”

And JP didn’t have to deal with friends, influencers, and celebrities constantly bragging about their lifestyle and wealth on social media all day long. There will always be people with more success, prestige, money, and accolades than you.

Easier said than done but not worrying about how much money other people are making can save you a lot of unnecessary stress and angst.

2. What you paid for an investment. Morningstar’s John Rekenthaler recently update the work of Hendrik Bessembinder to show how many stocks outperform the stock market: 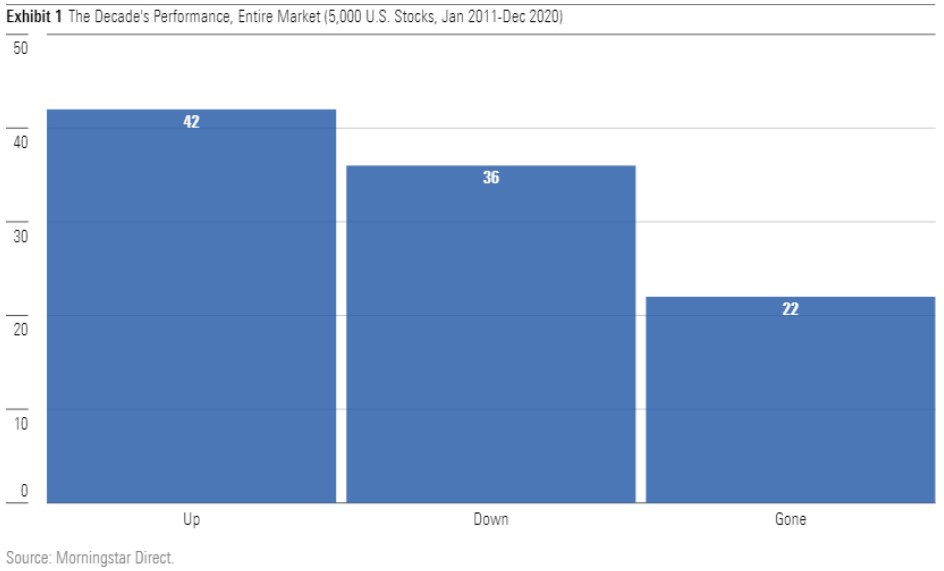 Although the stock market itself has been strong, the results for individual companies as a whole are not as good as you would expect in a bull market:

Although the Morningstar U.S. Stock Index enjoyed a 13.90% annualized gain for the decade, only 42% of individual equities finished in the black. Nearly as many (36%) posted 10-year losses. The final 22% vanished. While I did not investigate the fates of the dead, Bessembinder’s research suggests that half the expired stocks were acquired, with decent results, while the other half were delisted, with dire consequences.

Even during a decade marked by an almost uninterrupted bull market, the average stock wasn’t much good.

Picking stocks is harder than you think. Buy and hold is a terrific strategy for some stocks. For others, it’s the equivalent of an investor death sentence.

I’ll just wait until I break even is a tough place to be as an investor because some stocks don’t come back…ever.

There’s a fine line between being disciplined and being stubborn when it comes to investing.

There are no extra points for degree of difficulty when it comes to the markets.

Most investors would be better served doing less, not more.

4. One-year performance numbers. One year (or any shorter time frame for that matter) returns don’t tell you anything about yourself as an investor. Every investor will have good years and bad years.

You’re probably not as good or as bad as your short-term performance numbers suggest. Long-term returns are the only ones that matter.

5. Your IQ. EQ matters more than IQ when investing.

Yes, some level of intelligence is required but as Warren Buffett once said, “Investing is not a game where the guy with the 160 IQ beats the guy with the 130 IQ. Once you have ordinary intelligence, what you need is the temperament to control the urges that get other people into trouble in investing.”

There are plenty of intelligent people involved with the markets but not nearly as many who have control over their reactions.

Intelligence alone does not guarantee success in the markets.