Sadly, it appears hopes that the pandemic would end this year, may have been premature.

Numerous companies have been warning during earning season that the supply chain and demand disruption created by the pandemic continues.

And now with the Delta variant causing a 4th global wave, including causing some US states to set new records for cases, Wall Street is getting nervous once more.

Here are the three easy ways prudent long-term investors can not only avoid losing their shirts during these uncertain times but even profit from what is hopefully the final major wave of this pandemic.

The worst-case scenario for the pandemic has always been a new variant that gets around vaccine protection and is both more transmissible and deadlier.

Basically, such a strain could restart the entire hellish pandemic from scratch, and force countries to lockdown again.

But that’s not the most likely scenario.

Thus far the most effective and safest vaccines in human history have continued to provide remarkable protection, even from the scourge that is Delta. 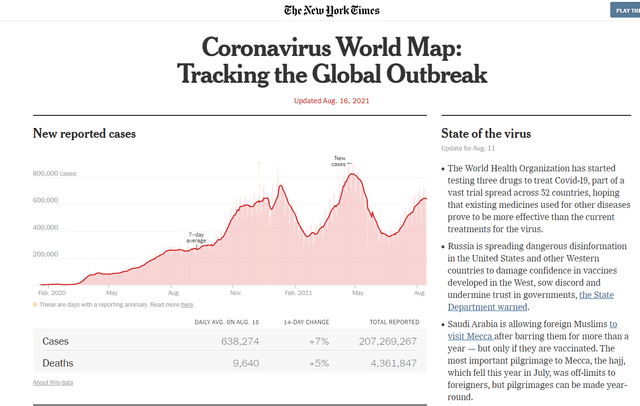 Globally, the 5th wave appears to be peaking, and below the 4th wave’s 900,000 daily cases. That 4th wave was caused by the Alpha variant (first identified in the UK) which was nearly twice as infectious as the original strain.

Delta is nearly more even more infectious, with the CDC estimating a R^O of 5 to 9, compared to 2 to 3 for the original COVID-19 virus.

In other words, each infected person can infect 5 to 9 others, which is why we’ve seen such a massive spike in the US, where just over 50% of the population is fully vaccinated.

However, parts of the country are far more at risk. Before the Delta surge, there were some counties in America with 20% vaccination rates.

For context, the CDC estimates that with a R^O of 5 to 9, it takes 80% to 89% vaccination rates to achieve herd immunity. 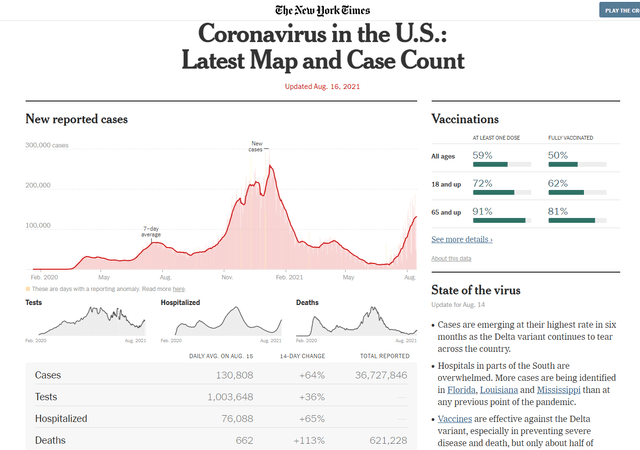 In the US we are perhaps approaching a peak, according to the IHME’s model.

IHME estimates that peak infections occurred last week, and by this week might see a peak in reported daily cases. Deaths are a lagging indicator that typically peaks 2 to 3 weeks after cases do.

However, thanks to 81% of 65+ year olds being fully vaccinated, the death toll is a fraction of the 4,000 we saw back in early January before vaccines were widely available.

Globally we’re nearly at 5 billion doses administered, and we’re boosting that by nearly 40 million per day, or almost 1.2 billion per month.

No, it’s unlikely that we’ll ever achieve global herd immunity against delta, not even in the US.

However, we are likely getting close to the point at which the virus becomes endemic, and something that is no more dangerous than the seasonal flu.

Moderna (MRNA) has even said its working on a combined flu/COVID vaccine that will offer the best protection ever seen again both flu and the most recent strains of COVID.

Pfizer (PFE) says it can have a new booster vaccine ready against whatever variants may crop up, in just six weeks. Obviously getting those approved and distributed will take far longer, but the point is that mRNA technology is a game-changer in vaccine development.