Home / Economic/Market Insights / How To Invest Better / Planning For Retirement / Reasons For Optimism / The Dividend Sensei Investment Method / 4 Things You Need to Know About the Fed’s Taper: Part 2
Posted On September 3, 2021 2:06 pm
By: Dividend Sensei

In part one of this series, we looked at when the Fed’s taper was likely to start and why another taper tantrum wasn’t likely.

Now it’s time to take a look at the two most important facts about the Fed’s taper plans. Facts that could help you avoid losing a small fortune, and missing out on one of the best bull markets in US history.

Fact 3: The Fed’s Bond-Buying Is NOT Directly Inflating Stock Prices

One of the most common misconceptions about the Fed’s bond-buying is that the Fed is intentionally trying to push up stock prices.

The plausible-sounding theory behind why the Fed might care about the market not falling fast or far is simple.

Now it’s true that the biggest single component of the Michigan consumer confidence survey is now the short-term performance of the S&P 500.

However, a recent study from the Kansas City Fed actually found that the popular belief that the Fed is lowering rates to pump up stocks could be 180 degrees the opposite.

According to the K-Fed its the savings glut of the rich that’s primarily driving down interest rates, and not the Fed’s bond-buying. In other words, the reason for rising wealth inequality looks more like this

Now the Fed’s taper plans, according to JPMorgan would still result in $600 to $1 trillion of extra bond buying.

Many investors understandably believe that this is “money printing” and driving a major market bubble.

With the Fed set to potentially buy $5 to $6 trillion of bonds by the time all is said and done, how could we not be in a major market bubble?

After all, with many analysts now expecting the Fed to not start undoing QE until 2024 or later, isn’t market inflation a virtual certainty? 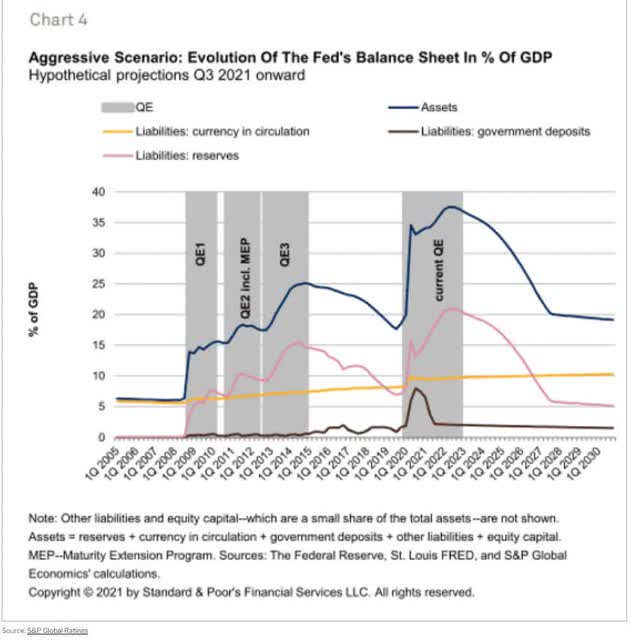 Actually, the Fed’s bond-buying is not directly going into stocks.

The Fed has never bought stocks but many people assume that all the new money created since the pandemic began must be going into stocks or at least a significant portion of it.

According to S&P’s research the amount of currency in actual circulation within the economy, including digital dollars, has barely increased since QE infinity began.

What’s more, it’s not expected to increase significantly in the coming years, not even out to 2030.

The Fed’s bond-buying is from large banks, and those printed dollars mostly end up sitting on bank balance sheets waiting to eventually, possibly, hopefully, get lent out to finance productive economic activity.

During the 2010s banks sitting on a mountain of bonds, partially due to higher capital requirements, is why the recovery was so much slower than we’d hoped for.

In other words, the Fed buying $10 billion in bonds from JPMorgan, doesn’t mean JPMorgan is using that money to buy stocks, crypto, options, or almost any other risk asset.

So does that mean that investors can stop worrying about a taper-induced market downturn?

Fact 4: A “Painful” Correction Is Coming