In part one of this series, we learned why the debt ceiling has no big deal, but this time might be different. In fact, analysts and economists believe the debt ceiling is currently the single biggest risk to the stock market.

Now let’s look at the two most important facts about the debt ceiling, and why it could potentially trigger a December 2018 style market crash, and how you can not only avoid losing money but possibly make a fortune from a short-term market freakout.

Fact 3: Why This Could Trigger Another Great Recession

The US government has never defaulted on its debt and that’s why US treasuries are the most popular “risk-free” asset on earth. Since the late 1940s, much of the global economy has been built around the risk-free nature of US bonds, and now we have $80 billion in liabilities coming due in the second half of October alone. 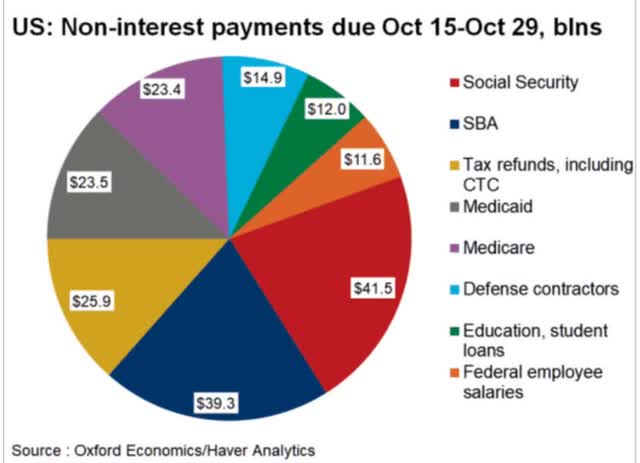 Every day the US government has money flowing in through things like payroll taxes and estimated tax payments from small businesses and corporations.

And every day the government is paying bills, to people like contractors, employees, and social security recipients.

The Treasury Department is in charge of making sure the government always pays its bills on time but Secretary of the Treasury Janet Yellen has warned that by mid-October the government might have to start defaulting on its liabilities.

That will create some very big problems because as we proceed further beyond the drop-dead date, more and more people won’t get the money that’s owed them.

For example, veteran pensions could be disrupted, social security payments could be missed, and Federal employees might not get paid, the same with contractors.

During government shutdowns, social security and veteran pensions are funded from separate sources and have never been disrupted. This time they might be.

The drop-dead date is the absolute limit of the debt ceiling beyond which the US starts defaulting. 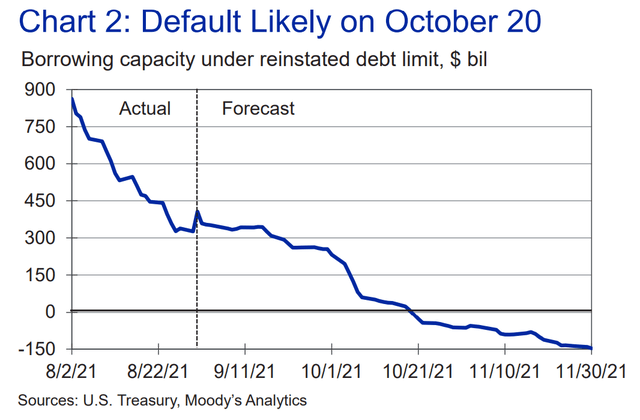 Moody’s estimates October 20th is the drop-dead date by which the debt ceiling must be raised to avoid a default. 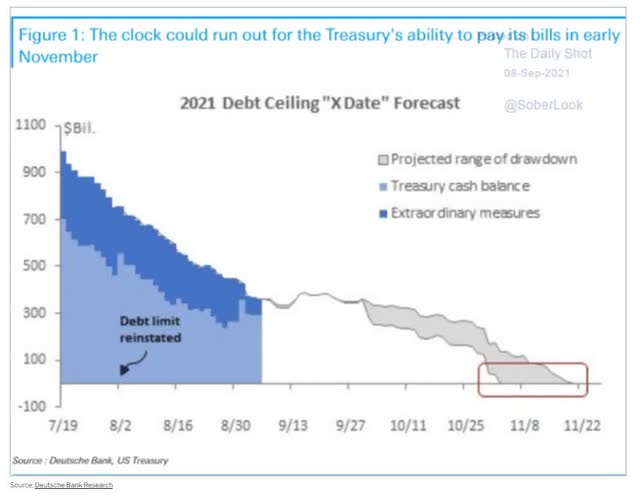 Deutsche Bank estimates it might be in late October and possibly as late as November 20th or so.

Secretary Yellen, who is in charge of making sure America pays its obligations on time, says that mid-October is the drop-dead date, possibly just three weeks away.

What happens if we breach the drop-dead date? Very bad things indeed.

Moody’s Base Case Economic Model For A US Debt Default 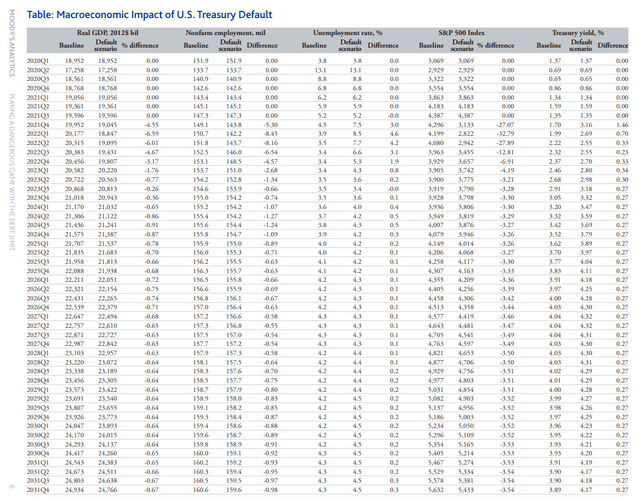 Moody’s chief economist Mark Zandi doesn’t mince words about what happens if the US government defaults.

This economic scenario is cataclysmic.

Based on simulations of Moody’s Analytics model of the U.S. economy, the downturn would be comparable to that suffered during the financial crisis.

That means real GDP would decline almost 4% peak to trough, nearly 6 million jobs would be lost, and the unemployment rate would surge back to close to 9% (see Table).

Stock prices would be cut almost in one-third at the worst of the selloff, wiping out $15 trillion in household wealth. Treasury yields, mortgage rates, and other consumer and corporate borrowing rates spike, at least until the debt limit is resolved and Treasury payments resume.

Even then, rates never fall back to where they were previously. Since U.S. Treasury securities no longer would be risk-free, future generations of Americans would pay a steep economic price.” – Moody’s

Moody’s assessment is echoed by not just Janet Yellen, and the credit rating agencies, but no less than six former Treasury secretaries from both parties.

The speed of this potential recession could be jaw-dropping, surpassed only by the two-month depression created by the COVID-19 pandemic lockdowns that saw GDP contract at a 32% annual rate from March to April 2020 and 20 million Americans lose their job in a single month.

For context, that was equal to the number of net jobs created in the entire previous decade.

In this potential crisis, Moody’s estimated 8.5 million Americans could lose their jobs by the end of Q1 2022. For context, the Great Recession, the 2nd worst recession in 75 years, saw 8 million net job losses over two years.

This time we could lose 8.5 million jobs in 6 months as unemployment nearly doubles, the economy contracts 6.5% and the stock market plunges 33%.

In March 2020, the pandemic crash stocks fell 34% in a month, the fastest bear market in history.

This time Moody’s thinks it might be a six-month decline that wipes out $15 trillion in shareholder wealth, more than the pandemic crash.

Even 10 years later, Moody’s estimates the US government will be paying 0.3% higher interest rates, and the economy will be 0.7% smaller, with an extra 1 million Americans unemployed.

In other words, we face a financial crisis unprecedented in its stupidness and preventability. Fortunately, this is merely the worst-case scenario and not what’s most likely to happen.