In part one of this series, we examined the short-term factors driving the sharpest increase in inflation in three decades, and learned about the reasons that a return to 15% inflation as we saw in the stagflationary 1970s and early 1980s, is highly unlikely.

Just as there are secular trends that are deflationary in nature, there are also those that are inflationary.

Macro 42’s Darius Dale, for example, thinks that inflation baseline levels around which future inflation will cycle is now 3%, up from the 1.6% we saw in the 2010s.

Why is that? Several factors.

For one thing, the labor shortage created by the “Great Resignation” is likely to persist for several years. 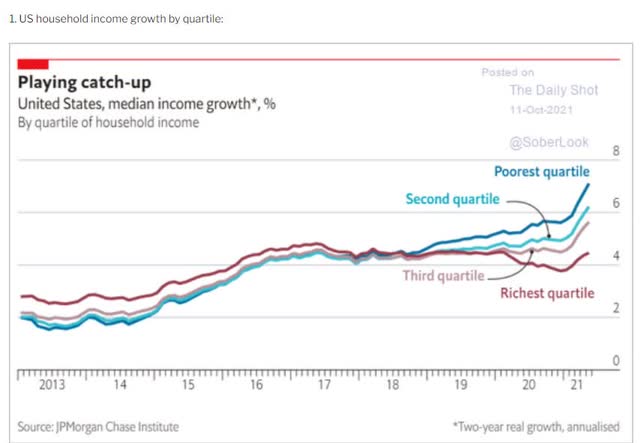 Wages are growing rapidly, 4.2% according to the Atlanta Fed, based on the median 3-month rolling average.

But for the lowest-income Americans its rising as quickly as 7%. And for some industries, like restaurants and hospitality, it’s growing at 17%.

Given that the bottom 90% spend 99% of their income that’s good news for the economy. But also potentially bad news for rising inflation pressures.

Another secular trend that’s likely to push up inflation over time compared to the very low levels of the 2010s is global supply chains.

China joined the World Trade Organization in 2001 and quickly became the factor of the world. Thanks to hundreds of millions of rural Chinese moving to factories in cities, this created a very deflationary rise in global trade.

Post pandemic, companies are diversifying their supply chains away from overreliance on China and some are even returning manufacturing to America.

While that’s great from the perspective of more US jobs and less fragile supply chains, it’s going to increase production costs for goods.

Several other economists also think that a permanently higher base for inflation is likely.

And the bond market agrees. 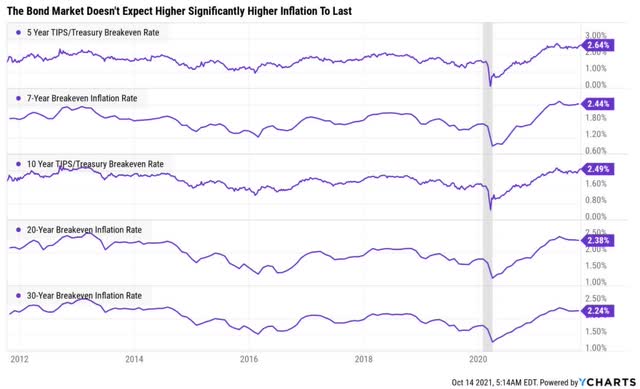 The bond market thinks long-term inflation will be 2.24% compared to 1.6% in the last decade.

That’s not as scary as 3%, but it’s very likely to require long-term interest rates to be a lot higher than their current 1.5%.

Good News/Bad News: Higher Inflation Could Result In A Lost Decade For Stocks

Stocks have had a remarkable 10-year run, soaring 340% thanks in part to steadily rising multiples that investors justified with the cry of “there is no alternative” or TINA. 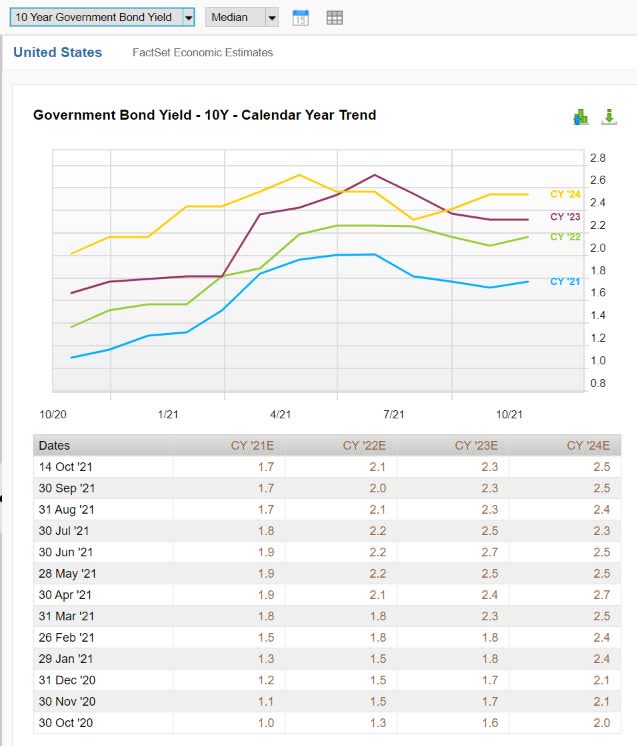 From record lows of 0.5% in August 2020, rates tripled as the economy reopened. And according to the blue-chip economist consensus they are likely to rise another 1% by the end of 2024.

Note that this estimate is up 0.5% over the past year, as inflation has proven to be less transitory than we initially hoped for.

Naturally, the popular growth stocks that seemed so “cheap and reasonable” when 10-year yields were 0.5% are likely to suffer significant multiple compression if rates rise by 5X to 6X, or possibly a bit more in the short-term.